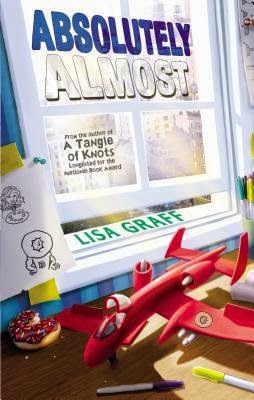 A couple of weeks ago, I read a review of ABSOLUTELY ALMOST somewhere. It sounded interesting, so I immediately put it on hold at the library. It came in this weekend. Interestingly,  ABOLUTELY ALMOST had its own little publicity campaign on Facebook and Twitter. I was glad, then, that I had already reserved it, because I bet it would be hard to get now.

When the book opens, ten-year-old Albie has just been kicked out of an exclusive New York City prep school, because he simply isn't able to perform at the required academic level. Enrolled in the public school in his neighborhood, Albie discovers he still is not smart enough. He is required to go to "Math Club" (remedial math) every day. He can't pass the spelling tests. His only friend is a girl named Betsy, who stutters.  And his parents and grandfather are all over him because he isn't meeting their expectations.  At the same time, Albie is a really good kid, a kind and caring kid. His babysitter, Calista, is the first person to point that out to him.

ABSOLUTELY ALMOST is a quick read. The chapters are short, mostly not more than a couple of pages, so it would be a great book for a kid who wasn't a super strong reader. At the same time, it's a really, really good story, with lots to talk and think about.

I've seen this shouted about so much, Carol, & glad to hear you like it too. Guess it's definitely going on the list! Thank you!

I think I need to reserve this at my library as well! Thanks for the recommendation!