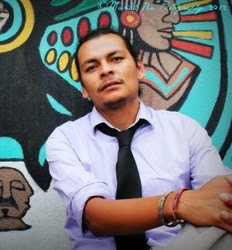 Today I am honored to share the poetry of Alejandro Jiminez. Alejandro is the life partner of Anyel, a sixth grade teacher and dear friend from my school. I've joked with Alejandro as he's schlepped boxes around our building, and he's cooked dinner as we've graded papers  at their kitchen table. I knew Alejandro wrote and performed poetry, but I had no idea he was so famous, until last week, when he sent me one of his poems and invited me to check out his website.

On his site, I learned:


Alejandro is spoken word poet, educator, avid distance runner and soccer fanatic from Colima, Mexico.  Arriving in the United States as an undocumented immigrant in 1995, and working as a farm worker for over 10 years in Oregon, he now resides in Denver, CO. Upon becoming the first member in his family to graduate from college, he moved to the 'mile high city' to organize for immigrant rights. Now, he works with youth as a mentor/tutor; and is a happy high school librarian.

In January 2012, Alejandro had the honor and privilege to write and read a poem for the 2012 Presidential Medal of Freedom Recipient, Dolores Huerta (long time organizer and co-founder of the United Farm Workers Union with Cesar Chavez). That year, he was also a member of the award-winning Slam NUBA! poetry slam team that placed 5th in the National Poetry Slam Competition.

In 2011 he became the first Latino to win the Su Barrio Slam Poetry Competition, joining the ranks of nationally recognized slam poets. That same year, he placed 2nd out of 300+ participants in the first La Raza's Got Talent Competition.

Alejandro  has allowed me to share his poem, "Why Mexicans should not use the n-word" in its entirety. It's edgy and tough and so, so perfect for the kids I teach and for my sons and well, really all of us…

"Why Mexicans should not use the n-word"

because they fill their prisons
with black and brown bodies
just like they did their shps
criminal justice system
is the new middle passage,
new jim crow
el nuevo juan cuervo
police brutality the new genocide

hermano
i like hiphop too
and I understand your favorite rapper
drops that word every other line
but tell me this
how many times have you smiled when someone's called you a beaner?
hermana
does it make you want to wave your hands in the air
like you just don't care
when someone calls you a spic?

you should not blame music
for your ignorance

does it feel like you are
strange fruit,
a broken branch,
dangling,
swaying,
surrounded by klansman
and children cheering
because there is one less of you

and i understand that you grew up in the barrio

that it is hard to see a link
between a black struggle and ours
and for this they have given you:
number 13,
blue and red,
black and yellow
same tactics used 500 years ago
they teach us now
so we can kill each other off

and i know it is hard to see a link
between a black struggle and ours
and for this they have given you:
shitty schools
that are waiting to spit you out

they invest more in your failure
than in your success

but you are much more than this

i know you have an inferno in your throat

i know that you have
arrows for teeth,
fists for lips,
ready to defend anyone
that dares to insult
your loved ones

but you,
have so much power in your voice
so much rage in the ocean that sleeps in your mouth

and that our ancestors have always known

that black and brown
have always been
and will always be
beautiful.

To read more of Alejandro's poetry, or to see him perform poetry, visit his website, www.alejandropoetry.com.

And check out Poetry Friday at Karen Edmisten's blog.

Wow. Jovan Mays from Slam Nuba has been in my class a couple of times. We should get them to do things at CCIRA.

That must have been fun, to discover more about the poet side of your friend Alejandro. It's wonderful that he is also a mentor and librarian (I think all librarians are mentors in their own way).

In my little bubble here, I don't hear derogatory names of any kind. "Why Mexicans should not use the n-word" makes a convincing case.

So true - we are moving backwards, for sure. Thank you for sharing this

My former students tell me that the groups are so divided at east, a big loss for everyone. This is terrific that you just discovered all this about your friend, Carol. The poem must be so powerful when spoken.

So very powerful - thanks to both of you for sharing.

"we are so busy creating walls
that we forget about quilombos"

Great, Carol -- how fun for you to find out about Jiminez, too, after knowing him over paper-grading and dinner-cooking.