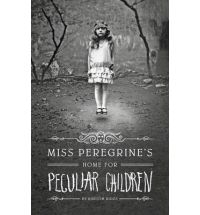 You know that old adage, "You can't judge a book by it's cover?" I think that's true. To some degree anyway. At the same time, I have to admit that I passed by MISS PEREGRINE'S HOME FOR PECULIAR CHILDREN for months. Because of its cover. The cover creeps me out. So much so that when my book club decided to read this book, I considered looking for a brown paper bag to make a book cover, like I used to have to do with textbooks when I was in junior high. The cover of this book just flat out gave me the creeps. I didn't want to read it.  I also really don't like paranormal fiction. That creeps me out too. But my book club chose it. So I read it. And actually liked it quite a bit.

Jacob is a doesn't-fit-in-with-the-crowd teenager, working at a family owned drugstore chain, when he gets a phone call from his grandfather, a Holocaust survivor suffering from dementia. Jacob's grandfather wants the key to a gun cabinet, which Jacob's parents have taken, because he believes someone is trying to hurt him. Jacob goes to check on his grandfather, and walks right into a frightening family mystery.

Without giving away the story, the mystery involves some photographs from the grandfather's childhood. The photographs are supposedly of children that Jacob's grandfather met when he was sent from Poland to Miss Peregrine's home on an island in Wales (I think?)  during World War II. Each of the children is doing something peculiar-- the little girl on the cover, for example, levitates. Another child lifts boulders, and still another has a mouth in the back of her head. Jacob has always believed the photographs were tricks done by a clever photographer. A letter and old book, left by his grandfather, convince him otherwise, and Jacob decides he must visit Miss Peregrine's home and solve his grandfather's mystery.

This book is sure to be a winner with the middle and high school set. It starts with a really vivid crime scene. They'll love that. It's creepy. They'll love that. It has an element of time travel. They'll love that. And it's illustrated with weird photographs of peculiar people, which the author collected, and then incorporated into the story. I wondered, throughout the book, how the author found so many weird pictures. If I wasn't so dang busy at work right now, and didn't have a grant that had to be finished before I go to work this morning, t would go looking for an interview to learn more about his process.

This is supposed to be the first book in a series. I'm pretty sure it's a series that teen readers are going to love.
Posted by Carol at 6:13 AM

Can't wait to meet for our book club to talk about this book! Love you, Book Lighthouse xoxoxo