A COUPLE OF ANIMAL BOOKS

I have been reading, for the last month or two, about THE ONE AND ONLY IVAN. Everyone has said it's terrific and I have been wanting to get my hands on it. Tonight I went to Tattered Cover because I NEEDED a book for my CLASSROOM (notice I said NEEDED and FOR MY CLASSROOM- that is very different than spending money on books for yourself). Anyway, TC didn't have the book I was looking for, but I happened to wander over to the mid-grade novels and THE ONE AND ONLY IVAN just happened to leap off the shelf and into my hands, and then of course, I had to buy it.

I brought it home and read it in one sitting. I loved it. In case anyone hasn't read it, Ivan is a silverback gorilla, who has spent most of his life in a small cage in a shopping mall. His best friends are an elephant named Stella and Bob, a dog who sleeps on Ivan's belly every night. Eventually, they are joined by a very young elephant named Ruby. Although Ivan has managed to convince himself that he is content, more or less, with living in a cage in the mall, he is not willing to let Ruby suffer that same fate… 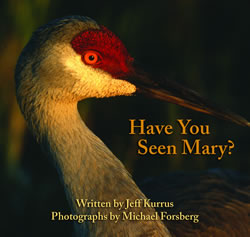 My other animal find is one that I have not seen anywhere in kidlitosphere. HAVE YOU SEEN MARY? by Jeff Kurrus, illustrated by photographer Michael Forsberg is the story of two sandhill cranes, John and Mary, who become separated during migration. John searches high and low, until he finally finds his mate. Not quite sure why I was so taken by this book, but I had a big lump in my throat as I sat on the floor at Tattered Cover reading. I love a good love story, and I could see giving this story as a Valentine's or anniversary present.

Perhaps one of the reasons I was so taken had to do with the absolutely gorgeous nature photography of Michael Forsberg . His photographs are breathtaking and complement the text perfectly. A totally delightful read.

I too have been seeing all the talk about Ivan, & guess I'd better get it. It does sound good. Will you read it to your class? And the other one must be beautiful. My class has studied about the cranes several times & traveled to Monte Vista for their flights south. They are marvelous to see, so this too must be for my wish list. Thanks Carol. Watch out for those visits to TC!

I just finished reading Ivan aloud. It nearly broke my heart to give a week of that book to my sub, but I got to begin it, got to cry when...(spoiler deleted), and got to get to that ending, with the art, and the reunion, and Bob in a backpack.