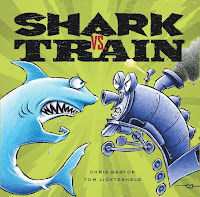 Last year, I was one of the lucky ducks that got to be a CYBILS judge. The entire panel loved Chris Barton's THE DAY GLO BROTHERS, a biography of the men who invented neon colors. DAY GLO BROTHERS eventually went on to win the CYBILS award for elementary nonfiction.

Yesterday our school librarian handed me Chris Barton's new book, SHARK VS. TRAIN. The book begins with a comic strip illustration of two little boys running to the toy box. One little guy grabs a shark, the other a toy train, and begin a series of "My toy is better than yours…"

Their conversation isn't just about an ordinary competition, however. I mean, everyone knows a train would win a land race and a shark would win a race in the water. But what about diving? A burping contest? Piano playing? A lemonade stand? Things just get crazier and crazier until finally the book ends when the two little boys are called to lunch…

The zany competitions are illustrated by Tom Lictenheld, who I know best for DUCK! RABBIT!

I know this is a book kids are going to ask for again and again. I also think it will also make a great readers' theater.
Posted by Carol at 4:46 AM