SIT-IN: HOW FOUR FRIENDS STOOD UP BY SITTING DOWN- Andrea and Brian Pinkney 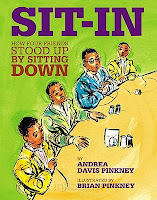 Someday, I will teach a high school history class. I won't teach it using the boring, tedious, fact-packed history text that my sons are forced to plow through. Instead, I will teach history using children's literature. And when I do, Andrea and Brian Pinkney's newest book, SIT-IN: HOW FOUR FRIENDS STOOD UP BY SITTING DOWN, will definitely be at the center of our unit on the Civil Rights Movement.

On February 1, 1960, four college students- David Leinall Richmond, Joseph Alfred McNeil, Franklin Eugene McCain, and Ezell A. Blair, Jr. took their seats at the Woolworth's lunch counter in Greensboro, Tennessee. They didn't need menus. Their order was simple. A doughnut and coffee, with cream on the side. Woolworth's was busy so the friends waited. Patiently. Silently. Without a fuss. They were the only black kids at the counter. They didn't get served that day, or the next, or the day after that. But each day, more students showed up, and soon there were lunch counter protests in Virginia, Tennessee, Alabama, Georgia, and many other southern states. Life was not easy at the lunch counter- the sitters had coffee poured down their backs, milkshakes flung in their faces, and pepper thrown in their eyes. Even so, they perservered, and on July 2, 1964, Lyndon Johnson signed the Civil Rights Act of 1964 into law.

The book is beautifully designed. Andrea Davis Pinkney somehow manages to weave a cooking/recipe metaphor throughout the book, with words that are so carefully chosen, they almost pass for a poem. Short quotes by Martin Luther King, Jr., done in bold and colorful block letters, are interspersed throughout the text. The back of the book includes a timeline of the Civil Rights movement, as well as a more detailed account of the lunch counter sit-ins.

A must have for anyone who wants kids to understand this very important event in Civil Rights history!
Posted by Carol at 8:21 AM

I just picked this book up too. I thought it was such a great one. I agree that it is a must-have.

I always think, too, how I'd teach a high school class...no textbooks, just picture books! Wouldn't that change things up?!

When you become that high school teacher, I want to become your student. Maybe you could fall me in love with history!