Moonshot: The Flight of Apollo 11 by Brian Floca 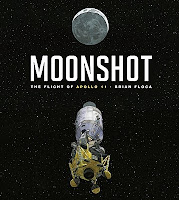 "Reading MOONSHOT gave me the feeling I was back up in space," said Michael Collins, the Command Module Pilot of Apollo 11. I've never been to space, but reading MOONSHOT, I felt like I was right there with Michael Collins, Buzz Aldrin, and Neil Armstrong, as they locked their hands into heavy gloves and their heads into large, round helmets, squeezed into the Columbia's sideways seats, and took off into the summer sky. And I was there as the astronauts went "rushing into the darkness, flying toward the Moon, far away, cold and quiet, no air, no life, but glowing in the sky." And I was there as Armstrong and Aldrin walked on the moon, "dust and stone beneath their feet, where no seed has ever grown, no root has ever reached…"

This is a really different information picture book. It's chockful of terrific information that starts on the front endpages and doesn't stop until you close the back cover. The information is really specific, really scientific, and really accurate (e.g. that the spaceship doesn't smell very good after a week of astronauts using the restroom in space) and yet the text sounds almost poetic. Listen to this description of the rocket…

Their (the astronauts) two small spaceships are
Columbia and Eagle.
They sit atop the rocket
that will rise them into space,
a monster of a machine:
it stands thirty stories,
it weighs six million pounds,
a tower full of fuel and fire
and valves and pipes and engines,
too big to believe, but built to fly--
the mighty, massive Saturn V.

The illustrations are a contrast too. Some pages are done in very light pastel colors. Others, when the astronauts are in space, have an all black background. Some two pages spreads are black on one side, showing the astronauts on the moon, and then pastel showing people on earth. There's a tremendous sense of perspective and movement. A really nice addition to any classroom library (or for the space lover on your Christmas list)!

Sounds fantastic. I'll need to get that one. Great review.

This is one of my kiddo's Christmas gifts. Can't wait to read it, too.