KEEP ON: THE STORY OF MATTHEW HENSON, CO-DISCOVERER OF THE NORTH POLE- DEBORAH HOPKINSON 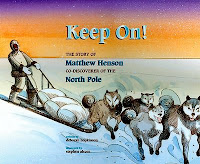 Deborah Hopkinson (SWEET CLARA AND THE FREEDOM QUILT, SKY BOYS) is one of my favorite picture book authors. Hopkinson knows how to take a story from history and tell it in a way that makes it interesting and accessible to kids. Her latest book, MATTHEW HENSON: CO-DISCOVERER OF THE NORTH POLE is certainly no exception.

Matthew Henson was born about the time the Civil War ended. As a young African American boy, he had big hopes for seeing the world, but not much hope of fulfilling them. Orphaned at 13, Henson somehow managed to convince the captain of a sailing ship to hire him as a cabin boy. The captain took fondly to young Matt and schooled him in the ways of the high seas. Five years later, the Captain died, and Matthew Henson ended up back on land, working in a store. That's where he met Admiral Peary.

Admiral Peary is a man many of us know as the discoverer of the North Pole. But did you know that he was actually not alone when he made this discovery? Peary was accompanied by none other than Matthew Henson. In fact, Henson was actually the one who bonded with the Inuit people, trained the sled dogs, and stood next to Peary at the Pole (after surviving a fall into the icy water a few days earlier). Amazingly, after they returned from their expedition, Henson worked as a parking lot attendant because that is the only job he could get.

I loved everything about this book- Hopkinson's powerful storytelling, Henson's journal entries, the end pages that include author's note and timeline, and Stephen Alcorn's oh so beautiful illustrations, done in hues of blues, and oranges, and golds. I will be using KEEP ON as the center of an African American history unit in January. Matthew Henson has a lot to teach my kids about dreams, and tenacity, and perserverance, and dignity. Some pretty important life lessons, I think!
**********
P.S. In case you are wondering why I have not been blogging--Ten days ago, my computer had an unfortunate accident (laptop bag meets parking lot, parking lot 1, laptop 0) and I have been without internet at home since then.
Posted by Carol at 10:36 PM

I blogged about this book too... she is one of my favorite authors! I use this in my study of stamina and endurance....

Off to NCTE, take care!