MY NAME IS SANGOEL- Karen Lynn Wiliams and Khadra Mohammed 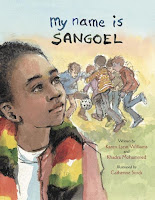 Eight-year-old Sangoel, his little sister Lili, and his mother travel in a "skyboat" to the United States. Everything is strange. The stairs in the airport move and Mama is afraid to step on them. The family does not know how to cross streets. They have to learn how to cook on the stove, eat with forks, and use the telephone. Sangoel sleeps on the floor next to his bed every night.

Hardest of all, though, is the loneliness. No one- not his teachers, not his soccer coach, nor his peers- even knows how to pronounce his name correctly. Sangoel tells his mother, "In America I have lost my name." His mother wonders whether he should take an American name. Sangoel, however, remembers the words of the Wise One in the refuge camps, "You carry a Dinka name. It is the name of your father and his ancestors before him." On his own, he figures out a way to teach people how to pronounce his name.

This year at my school, we have an extraordinary large number of immigrant children. We have always had many children from Mexico. This year,we have Falastin, who came from Somalia only a few days before school started, and speaks very, very, very little English. Manar is from Iraq. Glory, N'dago, Hawa, Amadou, and Patrick are from other countries in Africa. My kids need to read MY NAME IS SANGOEL. It will help them understand how it feels to be so new and alone. I think it will grow their hearts. And that, in my mind, is one of the main reasons for reading.
Posted by Carol at 8:54 PM