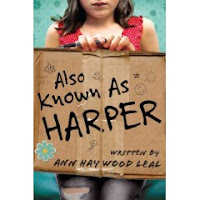 Last year, I used Barbara O'Connor's HOW TO STEAL A DOG as the first read aloud for one of my intervention groups. My fourth and fifth graders absolutely loved this book about Georgina, a girl whose family was living in their car. Desperate to help her mother make enough money to pay the deposit on an apartment, Georgina, a really good kid in a really hard situation steals a dog. My students loved this book and it came up in our discussions again and again. Several kids read other books by Barbara O'Connor. Sadly, three of the six kids in the group were homeless at one point or another throughout the year, and Georgina became a sort of compass, a beacon of hope in dark times.

I just finished ALSO KNOWN AS HARPER, and it's another book I want my students to have in their hands and in their hearts. Harper Lee Morgan's alcoholic father has abandoned his family, and her mother is working two jobs to keep a roof over her family's head. The financial burdens become too much, and Harper, her little brother Hem, and her mother end up living in a motel. Harper, a budding poet, is heartbroken, because for the second year in a row, she misses the school's poetry contest.

I loved this story. In these very difficult family times, I'm grateful to have yet one more book to place in kids' hands to somehow say, "You are not alone. Other kids have been here. They have gotten through this, and you will too." I love the community that Harper and her family find at the motel; Lorraine, a selective mute girl about Harper's age, who stopped talking after a horrible house fire, and Miss Dorothy, an elderly woman who wanders the edges of the motel, appearing to be homeless. I love the small kindnesses sprinkled throughout the book, e.g. the hotel maid who doesn't repair a broken lock, so that homeless people can take showers. I love Harper's poetry. And of course I love the fact that one of my all time favorite books, HOW TO KILL A MOCKINGBIRD, plays a prominent role in this book.

I'm pretty sure ALSO KNOWN AS HARPER will be the first book I read aloud this year.
Posted by Carol at 4:25 PM

I really wnat to read this book. I am starting with The Candy Shop Wars. Not sure what i will do next. Have a great first day!!!

I enjoyed both of these books. I ordered them on Amazon com for my kids, to read to them, then will donate them to the school.

Thanks for sharing about them.