MORE FROM THE HIP AND WITH-IT GAL 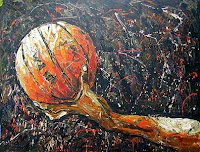 On Sunday afternoon, I take Son #2 to his basketball game. Son #1, having watched his brother play in approximately 5,734 games in the last five years, decides to stay home. When we return, all of the cushions from the couch, not to mention three of the stools that go with our kitchen table (which I purchased last summer) are on the back patio. My son's digital camera (the one that he uses for his high school photography class, the second one I bought this fall, after the first one was stolen) is perched precariously on a top of a pile of three of the couch pillows, which are stacked in Leaning Tower of Pisa fashion on top of the stool). Some people might get a little concerned about having their furniture outside, or perhaps they might worry about the safety of the digital camera, but me, well, I am the mother of two teenage boys. On other occasions, I have come home and found two or three dogs that do not belong to me in the backyard. I have found windows broken or body-shaped holes in walls that have mysteriously appeared in my absence. I have found four or five half-naked members of the high school football team sitting on my garage roof.  So, a little furniture out on the back patio-- well, don't sweat the little things, right?
I am a little curious though, as to the reason for moving a good portion of the furniture that is regularly in the house to the patio. When I inquire of Son #1, he tells me he has been making a video, and hops onto my computer to show it to me. The video begins with Son #1 walking out the door of our family room onto the patio, doing a little trash talking about his ability to dunk a basketball, then showing that he can actually perform this feat. At one point, the camera zooms in to show the ten foot marking on the handle of the basketball hoop, at another point he says he is going to the NBA, and zooms in on the NBA label on the basketball. The video, probably about a minute in length, is a little shaky, but hey, what can you expect from a camera perched on top of a pile of pillows on top of a kitchen stool on the patio? This video is a crafted piece of work, with a clear beginning, middle, and end, wide outs, and close-in shots. I suspect that Son #1 (who has struggled his entire life with school kinds of learning) has spent as much time thinking about how to craft this piece as I do any piece that I write. I am sure he has probably spent most of the afternoon playing around with the piece, filming and re-filming, trying to get just the right effects. I know he and his brother will probably repeat this activity several more times over the next few weeks.
This morning, three or four days after the filming, (and after the stools and couch cushions are returned to their rightful place in the house), I read Franki's entry about a new book that is coming out. SKELETON CREEK, though, is not just a book. It seems that every twenty pages or so, you have to stop and go online, because part of the "book" is actually done in video segments. Franki thinks that the book will be especially intriguing to reluctant readers, who start a book with great enthusiasm, but then quickly lose interest. When this reader picks up SKELETON CREEK, he/she only reads twenty or so pages before getting to view another video segment. Franki shares a link to an interview of author Patrick Carman, where he talks about his composing process- how he wrote the chapters, but also how he wrote the scripts and worked with a videographer. I can't wait until this book/video adventure is published in February, because I suspect my sons, not to mention all of my intermediate grade readers, will absolutely love it.
Being the hip and with-it gal that I am, I'm trying really hard to get my head around all of this. I suspect our roles as  teachers of reading and writing are going to change dramatically over the next few years. I suspect it's true that "composing" a piece of writing will no longer be about simply crafting words, instead, "writing" might also involve images and film clips. Writing one piece might actually be about writing two or three shorter pieces, e.g. a small moment memoir or essay, a video script, and maybe some captions for pictures, almost a mini multi-genre piece. Kids will probably still  need to learn to write persuasive essays, but they also need to know how to create effective power point presentations.
So I'm wondering, as I prepare to get my boys up and as I think about the reading and writing lessons I will teach today, what does all of this mean for me, the hip and with-it, 21st century twittering and ninging gal that I am?? It's a little bit scary…
*************
P.S. If I was a just a teeny little bit more hip and with it, I could figure out how to upload MaryLee and Franki's cool 21st century icon!
Posted by Carol at 4:11 AM

It's all about possibilities! I love it. Your sons never imagined barriers to making the video. They jumped right in and moved that furniture outside. Our learners should feel like they can overcome whatever gets in their way.

The book that Franki mentioned in her blog is simply fascinating to me. I am hoping that she will let me borrow it.