WE ARE THE SHIP: THE STORY OF NEGRO LEAGUE BASEBALL 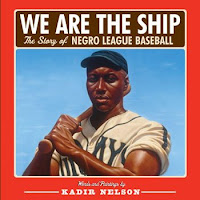 "Those little towns in the South were rough. The fans would call you everything. One lady brought us a big black cake. Had it delivered by a man in a white coat. Written with icing, from the top corner to the bottom corner, at an angle, was spelled N-I-G…etc. Now you wonder, why would anyone go through the trouble to do something like that. I guess you could call that dedication" (p. 58).
WE ARE THE SHIP: THE STORY OF NEGRO LEAGUE BASEBALL is truly an incredible book on a number of different levels. Kadir Nelson uses what the book jacket describes as an "Everyman" narrator to tell the story of Negro League baseball from its beginnings in the 1920's until Jackie Robinson began playing for the Brooklyn Dodgers in 1947. The voice in the book is so real that you feel like you are right there on the field with the players. This is a story that's way bigger than baseball, however. It's a story of a group of people who really did take lemons and make lemonade. It's a story of creativity, and bravery, and passion, and joy.
The book is organized into ten chapters-- nine innings and one "Extra Innings" chapter, each focused on a different aspect of Negro League Baseball-- how the league began, the rules of the league, famous players, negro baseball in Latin American, the negro leagues vs. the white leagues, etc. I absolutely loved this book, and read it cover to cover in one sitting, but if I were going to choose a favorite chapter, it would be "Third Inning: Life in the Negro Leagues" because it paints such a vivid picture of the lives of African Americans in the pre-Civil Rights era. I definitely plan on using it as part of a Civil Rights unit in January.
As for the artwork-- all I can say is WOW, WOW, WOW, WOW, WOW! I have been a fan of Kadir Nelson's illustrations since I discovered his work in MOSES: WHEN HARRIET TUBMAN LED HER PEOPLE TO FREEDOM. With this book, however, Nelson has definitely moved into my club of all time favorite illustrators of children's books. His paintings of  the players, different fields, etc. are absolutely gorgeous. According to the author's notes in the back of the book, the paintings have appeared in various museums across the United States.  I sure hope they will come to Denver some day.
Posted by Carol at 7:59 PM

I loved WE ARE THE SHIP, too, and we're including it in our Mock Newbery discussion next month. Thanks for posting your review!

This sounds fascinating. I'll have to see if our library has a copy. Thanks!