THE NEXT WAVE- ELIZABETH RUSCH 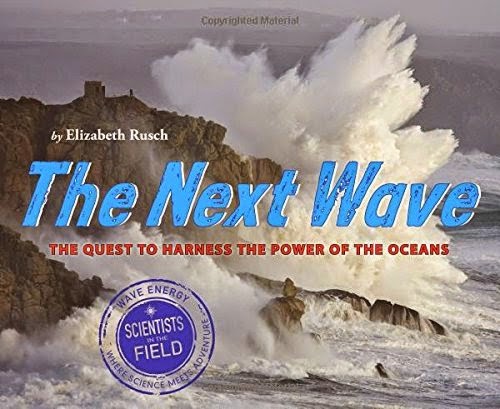 I love books that talk about how people work.
And the grit that it takes to make something happen.
And how many "mistakes" have to happen before an invention is successful.

It makes sense, then, that I would love Elizabeth Rusch's newest book, THE NEXT WAVE: THE QUEST TO HARNESS THE POWER OF THE OCEANS, explores the work of three different teams, all working to harness the power of waves to generate energy for homes and businesses.
First, Rusch takes into the lives of Mike Morrow and Mike Delos-Reyes, two kids who liked to take things apart. The two attended Oregon State University, where they invented a wave device for their senior project. Twenty years later, they dragged out their design and founded M3Wave, a company committed to harnessing the power of the ocean.

Annette von Jouanne is a professor at Oregon State University (she wasn't there when Morrow and Delos-Reyes attended). As an electrical engineer, she is concerned "about our heavy use of nonrenewable resources, how much we burned fossil fuels for energy, and all the pollution that they made). Rusch details Von Jouanne's team as they try, and fail, and adjust, and try again, over, and over and over. Finally, Rusch invites her readers to visit the work of a third company, Ocean Power Technology, which "might be the first in the water to provide real energy to real people."

THE NEXT WAVE is part of the SCIENTISTS IN THE FIELD series. Like other books in the series, the book not only includes terrific information, but it's also beautifully designed. Color photographs enhance the text on pretty much every page. There are numerous side bars and pull out articles, maps and diagrams, to build the readers' understanding of the topic.  End matter includes a glossary, carefully detailed sources and places where the reader can go for more information.
Posted by Carol at 11:38 AM