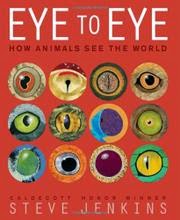 A new Steve Jenkins' book?? Yes sirree, when my all-time favorite nonfiction picture book author releases a new book, I am on it! OK, actually this book was released in April, but who's counting? In EYE TO EYE, Steve Jenkins takes on the topic of animal eyesight. The book begins with several pages of narration about how animals use their eyes to find food, to protect themselves, to attract mates, etc. Jenkins then goes into an explanation of the four different types of eyes- eyespot, pinholes, compound, and camera eyes. From there, each page features information about  a different animal's eyesight, with an enlarged head shot, and then a thumbnail of the entire body. Lots of interesting and bizarre facts, sure to delight even the most reluctant reader:
End pages include the evolution of the eye, a page with a few more facts about each featured animal, a bibliography and a glossary.
Posted by Carol at 7:40 AM

What a neat-looking book! Fascinating stuff.