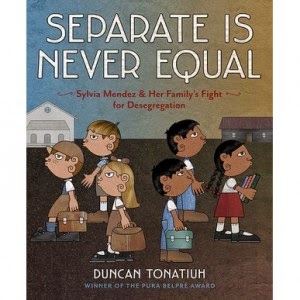 Pretty much every school-aged child I know can tell you about Ruby Bridges. Far fewer, however, maybe almost none, can tell you about Sylvia Mendez. And yet it was Mendez and her family, in Mendez v. Westminster, who actually paved the way for desegration in 1947, seven years before Brown vs. the Board of Education and over a decade before Ruby Bridges.

In 1944, Sylvia Mendez and her family moved to Westminster, California. That first day, her aunt took Sylvia, her two younger brothers, and two cousins to register them in school. The aunt was told that her own daughters, who looked Anglo, could attend the school, but that Sylvia and her siblings could not. They needed to go to a "Mexican school" in another part of town. The Mexican school was far inferior.


"The building was a clapboard shack and the halls were not spacious or clean. A cow pasture surrounded the school. The students had to eat their lunch outside and flies would land on their food. Their was an electric wire that surrounded the school to keep the cows in. If you touched the wire, you received a shock!"

Sylvia's father, a businessman, was sure there had been a mistake. The next day he talked to the principal, then the superintendent, then the county superintendent. He consulted other families to find out whether they had received similar treatment. Finally a truck driver overheard him talking to other families, and suggested that the family should file a lawsuit. The suit went through several trials and finally ended up in the  Court of Appeals, where it was decided in favor of Mendez and her family. Mendez attended Westminster schools until her family moved back to Santa Ana a few years later. She graduated from an integrated high school, then studied nursing at California State University. She was a nurse for more than 30 years, until she retired to take care of her mother, who was in ill health.


"When we talk about Tonatiuh’s art it’s important to understand why he’s chosen the style that he has. In interviews the artist has discussed how his art is heavily influenced by ancient Mexican styles. As he said in an interview on the blog Seven Impossible Things Before Breakfast, “My artwork is very much inspired by Pre-Columbian art, especially by Mixtec codices from the 14th century. That is why my art is very geometric, my characters are always in profile, and their ears look a bit like the number three. My intention is to celebrate that ancient art and keep it alive.” Heads of participants are always shown from the side… There are mild problems with it, since the neutral expression of the faces can resemble dislike or distaste. This comes up when Sylvia’s cousins are accepted into the nearest public school and she is not. Their faces are neutral but read the wrong way you might think they were coolly unimpressed with their darker skinned cousin. Still, once you’ve grown used to the style it’s hardly an impediment to enjoying the story."

End matter includes a note from the author, photographs of Sylvia, her parents, and the schools she attended, a glossary, a bibliography, and an index.

This is a really important book-- one that should be in every classroom in the United States. Sylvia Mendez's name should be as well-known as Ruby Bridges!
Posted by Carol at 5:54 AM

Sorry about the round-up mess. You are masterful at re-creating! I came back last night with a little time to read, & it was gone! Argh for tech stuff! I wanted to say thanks for highlighting this book. I did enjoy it very much, love all the recent biographies of those we have not heard about, & this is an excellent one.

Hi Carol,
I did manage to sneak in just before midnight EST (which is pretty impressive in your time zone...lol). Your site was down at the time so I'm back: http://merelydaybyday.blogspot.com/2014/11/poetry-friday-yesterday-and-today.html

Thanks for hosting, Carol. I'll stop by your corner anytime!
Cathy