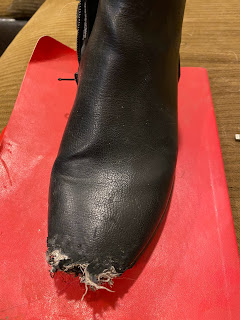 I arrive home from Bible Study and head into the bathroom to change my clothes.

And that's when I notice it.

One black boot sitting in the corner of the bathroom.

I don't even have to guess what might have happened to the other one.  Four hours earlier, right before I left for Bible Study, I wrote a slice about the newest member of our family, my 18-month-old Collie/German Shepherd mix, Galaxy. In that slice, I wrote,

Galaxy specializes in chewing. He has destroyed multiple pairs of shoes, a television remote, books, a Longaberger basket, and a couch cushion, among other things. There seems to be no rhyme nor reason to his chewing. Sometimes he will go for weeks without eating anything, and then I'll come home and the couch is shredded  across the family room floor, the next day it will be my good boots.

I forgot to mention Rooney's training vest. Galaxy ate the straps off of that about a month ago.

Anyway, I had a good idea about what had probably happened to my other boot. I grabbed my phone, turned on the flashlight and headed out to make a sweep of the backyard. That's where Galaxy often takes his treasures, and I was hoping maybe I could find it before he had done too much damage.

I checked all of his favorite places-- the muddy corner by the big tree, behind the garbage cans, and under the porch. My boot wasn't in any of those places. Instead, I found it in the middle of the family room, with half of the toe missing. Definitely not wearable or even repairable. And did I mention that that was his third, or maybe his fourth boot this winter.

I know by now people are probably judging me. By now, I should have learned my lesson. I should have put my boots away. And generally I do put them away as soon as I take them off. And when I say I put them away, I mean I REALLY put them away. Galaxy is a pretty smart guy, who can easily open the bedroom door and the closet door, so not only do I close those, but I put up a baby gate up in front of the bedroom before I leave the house.

Last night I was hurrying and I just forgot. So now I'm out a pair of boots.

Galaxy, who happens to be laying next to me snoring as I write this slice, is a total sweetheart. But he has a long way to go before anyone will call him a good dog....

What a great last line! I love how you make the story unfold.....first seeing the one boot, then searching everywhere for the other one....the photo with its foreshadowing of what has happened to the boot was an added bonus.

I can't even imagine you scolding anyone, but I know you must.
I love that you cuddled with Galaxy later.
What a slice!

Oh, Galaxy! Smart dogs are the best and the worst all at the same time!