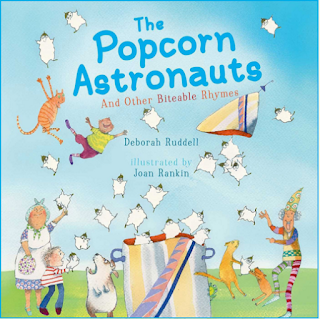 I've spent the last two and half months as a first round poetry judge for the CYBILS award. We were charged with the task of choosing seven books from 48 terrific nominations, and The Popcorn Astronauts And Other Bite-able Rhymes by Deborah Ruddell was one of the seven finalists we selected. The book includes 21 poems about food, organized by season: spring is smoothies and guacamole, summer is, of course, watermelon, Fall is baked potatoes and brownies, and winter is popcorn, mac and cheese, and brownies. One of my fellow judges, Nancy Bo Flood, describes the book in this way:

"Delicious. Ridiculous. Funny. Engaging. Popcorn Astronauts offers a variety of “edible” poems that are as strange and crazy as the book’s title. For example, try a shake ordered to poetic specifications: “A frosty cup of moonlight, please … As mushy as a mittenful of slightly melted snow ….” If that is a little on the chilly side, then try “Dracula’s Late-Night Bite,”especially after he “flosses his fangs and he slides out the door for dessert.” Great poems to cause both laughter and interest in young readers and examples for writing one’s own delicious verse."
Nancy Bo Flood, ReaderKidz


Arrival of the Popcorn Astronauts
The daring popcorn astronauts
are brave beyond compare--
they scramble into puffy suits
and hurtle through the air.

And when they land, we say hooray
and crowd around the spot
to salt the little astronauts
and eat them while they're hot.


And one of my personal favorites:

How a Poet Orders a Shake
"A frosty cup of moonlight, please"
the poet murmurs low.
As mushy as a mittenful
of slightly melted snow...

"And softer than a summer cloud
and paler than a swan
and pearlier than polar bears,"
the poet rambles on.

And let it be at least as sweet
as icing on a cake
In other words, my usual:
a small vanilla shake.
- - Deborah Ruddell

For reviews of the other six finalists, go to the CYBILS website.

Tabatha is hosting Poetry Friday this week at The Opposite of Indifference.
Posted by Carol at 4:26 AM

Love this book! SO glad to hear it's one of the finalists. :)

I read and reviewed this earlier in the year, Carol. It is quite clever, and full of fun, I agree. I'm reading, reading now!

How a Poet Orders a Shake is my favorite, too. Such fun!

This looks like a very fun book, judging from the samples you've given. (I'd actually like one of those shakes right now ;)