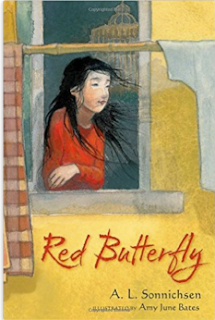 Almost a month later, I'm still wrapping up my CYBILS reviews. Today's book is another novel in verse.

RED BUTTERFLY, the debut novel of author A.L. Sonnichsen, is the story of Kara, an eleven-year-old girl in China.  Kara has a limb deformity, a malformed hand, that caused her birth parents to abandon her.  She lives with an elderly American woman, whose visa expired long ago. The Chinese government will not let the only mother Kara has even known adopt, because of her age, and so the two live a secret life, closeted away in a tiny apartment. The woman's husband and adult, Jody, live worlds away in Montana, and Kara wonders why they cannot visit or move there.

Jody comes to visit and suffers a medical emergency, which causes the family to be discovered. In the second section of the book, titled "Dissolve," Mama is deported and Kara ends up in an orphanage, where she is befriended by a physical therapist (whose name I failed to include in my notes- sorry!). Most of the children in the orphanage have much more intensive physical challenges, such as cerebral palsy and spina bifida, and Kara ends up helping, and befriends several of the children.

Kara's Montana family is not allowed to adopt her, because of their age. Eventually, she  is adopted by a family in Florida, who has several other children adopted from China. Kara has difficulty adjusting to her new life, away from the only mother she has ever known, and I love that this book does not sugar coat how hard that adjustment period really is.

Upper elementary and middle school kids will enjoy this story, as will adoptive families. I know I did!
Posted by Carol at 8:24 AM