POETRY FRIDAY- ONE THAT GOT AWAY 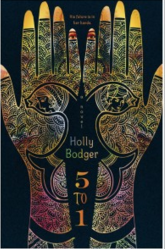 Not quite a month ago, I wrapped up a stint as a first round judge for the CYBILS poetry category. This year, for the first time, novels in verse were included under poetry, and there were a lot of great ones, I think around 15. Today's offering, 5 to 1, by Holly Bodger, a dystopian story, is told in two voices, part novel in verse, and part prose.

The year is 2054. In India, where gender selection has gone on for many years, there are now 5 men for every one woman. A group of women, tired of the inequality, have somehow managed to wall off an entire city and create their own country, Koyanager. Men in this city/country exist for one purpose-- to serve women.

"Boys are taught only useful things. Things that will help them serve the women in Koyanagar."

Woman in Koyangar select their husband through a special process, that feels, to me, a little like THE HUNGER GAMES. Five men are involved in a series of contests. The winner of these contests becomes the lucky husband. Losers are sent away to serve as wall guards for Koyanagar.

Sudasa, whose story is told in verse, is an unusual young woman. She does not want to select a husband this way.
I should be thankful.
Thankful my sex
guarantees me the life of a bird
Food.
Safety.
A home?
Feels more like a cage.

She is even less pleased to learn that somehow, her contest has been fixed, and a cousin that she doesn't even like,  is included in her five choices, intended to be her husband.

Kiran, another one of Sudasa's five choices, whose story is told in prose, is also more than a little unusual.

When I was about to turn fifteen, I got up extra early so I could finish my chores and then listen to every minute of the tests. But after a few months, they all sounded the same. Different girl, different boys, but the rest: same same same. And still, the people here today have swarmed like flies to a rotting corpse. Someone should tell them they’re a bit early. The corpses come after the tests.

Kiran has plotted with his father to lose the contest, and then somehow escape from Koyangar.

I thought the ending of the book would be predictable. I expected Sudasa to defy her family, and select Kiran. The two would then fall in love and live happily ever after. It seemed a given.

You will have read the book yourself to see whether that really happens.

"No, we cannot change


the mistakes we’ve left behind.
But there’s one thing we can do—
one thing I must do—
we can choose not
to repeat them."

This book seems perfect to hand off to THE HUNGER GAMES/TWILIGHT crowd.

Tara, at A Teaching Life,  is hosting Poetry Friday today.
Posted by Carol at 4:37 AM

Carol, your link at Tara's site is not working-FYI. I agree about the verse novels being so lovely, & there are many. This one sounds great, glad you shared about it. I like that first part where she says it's more like a cage. What an interesting plot. And I like that part is poetry & part is prose. Thanks, Carol.

Carol, this is a fascinating tale that you have written about. Dystopian novels are the rage now but one told in verse and prose is quite a different twist to the genre. Since I loved the Hunger Games this book sounds like a perfect partner.