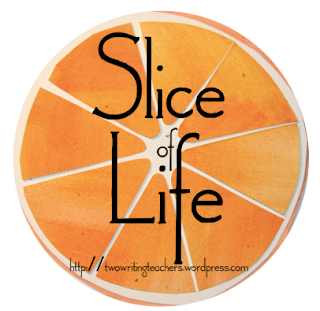 That means one thing.

I started taking Spanish when I was in fifth grade.

Took it for two years, until the professor told me that I had gotten as fluent as I was going to get unless I did a semester abroad.

Played around intermittently for the next thirty years.

Nine years ago, I was hired to work at a dual language school. And was totally blown away by how my colleagues, and my students, some as young as kindergarten, could move seamlessly between Spanish and English, depending on whom they were talking to.

I wanted to be able to do that too.

I dabbled in Spanish for the next few years.

About two years ago, I decided I wanted to get serious.

I want to be able to interact with my colleagues in both languages.

I want to talk with my students and their families.

And so at least once a week, and more if I can squeeze out the time, I attend Spanish class.

Tonight was that night.

This semester, the teacher is Bex, who also owns the school. Except she wasn't there tonight

Subbing in was Austin. I think he's probably about my son's age. Austin graduated from college, spent several years traveling the southern hemisphere perfecting his Spanish, and is now back in the United States, going to grad school and teaching Spanish on the side.

There were four other students in class tonight. All about my son's age. I definitely felt like una vieja (an old lady).

But if there is one thing I have learned in taking Spanish, it's that you just have to put yourself out there. Try. Make mistakes. Laugh at yourself. Try again.

And so that's what I did.

And even though I was the oldest, and definitely not the most fluent, I had fun. Practiced past and imperfect verbs. Learned the superlative.

I love Spanish, haven't used it much recently but it's still my favourite foreign language. I think Spanish teachers are usually fun to work with. So yes, keep going, being old never stopped anyone doing stuff. I started in my 40s. Such an enjoyable slice!

Soy una vieja tambien. (Haha... side note- spellcheck tried to change that to Vienna.) Anyway, I learned Spanish from elementary-2 semesters of college. I have lived in Panama and Peru, now I teach ELLs, mostly Spanish speaking. Today I spent the day at Parent Conference Day interpreting ... I still am nowhere near fluent or bilingual, but effort and caring count for a lot. So keep learning... it’s worth it.

I am in the same boat. I have a group of women who get together every few weeks to practice our Spanish. We did really well for the first year or so. Now we just share chismes in English and watch Spanish telenovelas. It works!