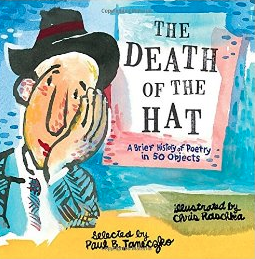 Several years ago, hunting for ways to teach kids about specificity in writing, I came across the William Carlos Williams' quote, "No ideas but in things." (I think I found it in something written by Nancie Atwell, but I'm not positive what). I used the quote for a whole series of mini-lessons, again, I think, based on some ideas I found in Nancie Atwell's work.

I thought of that quote, when I ran across a new poetry anthology a few weeks ago at Tattered Cover. THE DEATH OF THE HAT, selected by Paul Janezcko, is a collection of poems about common, ordinary, every day objects. The poems are organized chronologically, grouped into nine different time periods, beginning with the Early Middle Ages, and progressing through the Renaissance, Modern poetry, Post Modern, and Contemporary.

There are well-known poets- Rumi, William Shakespeare, Yeats,  Carl Sandburg, William Carlos Williams. And some poets I had never heard of.

There are twelve poems by women, beginning with Eloise Greenfield and including people like Phyllis Wheatley, Christina Rossetti, Sylvia Plath, Mary Oliver, and Rita Dove.

There is a really terrific introduction by Paul Janezcko, who briefly discusses some of the characteristics of each era, as well as the challenges of selecting the poems.

The book is illustrated with watercolors by Chris Raschka (who happens to be my birthday twin, we were even born in the same year!).

I think it would be interesting to ask kids to make collect an anthology of object poems. Or poems about a specific object through the ages.

Margaret at REFLECTIONS ON THE TECHE.  is hosting the POETRY FRIDAY ROUNDUP this week
Posted by Carol at 4:58 AM

Thanks for sharing this review! I definitely want to get a copy of this before fall so that I can use as a mentor text in a couple of my classes. I remember "no ideas but in things" from In the Middle but, especially, from Lessons That Change Writers (a book that saved my life as a second-year teacher struggling to implement workshop, an approach I'd never seen practiced in an actual classroom or experienced myself).

I've been curious to see this book. Thanks for sharing your thoughts about it. :)

Recently got and it has some enticing offerings. I enjoyed Paul J's introduction as well. I don't love it quite as much as the first two in the series of collaborations, but it's worth a read. Thanks for sharing.

No better combination of poet and illustrator. I look forward to finding this book and like your idea of collecting object poems. J Patrick Lewis has a collection called "Everything is a Poem." Poems can be about anything!

I have this book, Carol, and you're right, it fits so many places, is filled with ways to use with students, or us! Thanks for reviewing it.

I just bought this book for my classroom,Carol - such a wonderful collection!

I can't wait to see this book!

What Mary Lee said! I really want to get a copy.