A HANDFUL OF STARS- Cynthia Lord 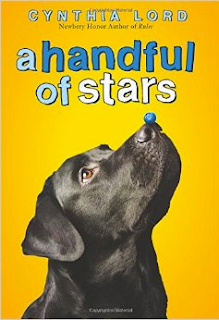 OK, I'll admit it. I'm a Cynthia Lord groupie. And I have been since the publication of RULES in 2007. I've read all of her middle grade novels- RULES, TOUCH BLUE, HALF A CHANCE. And I've been hearing snippets about her newest book, A HANDFUL OF STARS, for at least six months, maybe even a little longer. I kept trying to win it in a contest, but it didn't happen. So finally, a couple of weeks ago, I broke down and pre-ordered it. It came over the weekend, and I pretty much devoured it in one sitting. I loved it.

For starters, it's set in Maine, one of my favorite parts of the world. And one of the main characters is Lucky, a sweet black lab who has that little bit of naughtiness that seems to be inbred in every black lab I've ever owned. Lucky is blind, and his owner, Lily, is trying to earn the money for him to have a cataract operation, so he will be able to see again.

When the book opens, Lucky has gotten loose, and Lily is chasing him across the blueberry barrens. Lucky is captured by Salma, a migrant girl about Lily's age, whose family picks blueberries. Salma and Lily become friends, and soon she is helping Lily paint bee houses (which I had never heard of) to raise money for Lucky's operation.

Through Lily, Salma learns about the town's Blueberry Festival. She decides to enter the Blueberry Queen Pageant, because the prize is a savings bond, which she could use for college. But Salma doesn't look anything like the typical Blueberry Queen. And people in the town aren't sure that a dark-eyed Hispanic child, who is not even a local, should win the prize.

A terrific middle grade about friendship. And prejudice. And saying goodbye.
Posted by Carol at 3:56 AM