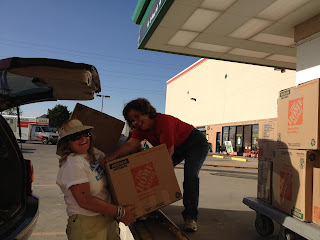 I was in a somewhat unique situation. Unlike most teachers, who had worked there for five, ten, or even twenty years, I was only at the school for one year. I knew I was only going to be there for one year. I didn't have tons and tons and tons of stuff. Basically, all I had was my personal items- pictures of my boys, the rocking chair where I sit for read aloud, and, my books.

My books. The staple of my life as a teacher. Picture books. Nonfiction. Poetry. Chapter books- both stand alone and series. Forty-five boxes of books, to be exact.

The kids left on Friday at 1:30. Most of the other stuff- district curriculum, math manipulatives, computers and document cameras-had been removed, one thing at a time, throughout that last week. As one of those teachers who usually teaches until the bitter end, and then takes down the room after the kids are gone, it was actually kind of strange for me to have things start disappearing before the week was over, but that was how the process had been organized, and so pretty much everything else was gone.

And all that was there, on Friday afternoon, was just the books and me.

I looked around at those piles and piles of books, and wondered how I was ever going to be out of the building by today at four, which is when the charter school is scheduled to take over the building. I envisioned leaving everything. Fleeing to Mexico. Or just making mad sweeps off the counter and sorting everything out next fall at my new building. I wanted to cry.

But then my book club arrived. Karen. Brenna. Laura. My home gals. The women who have been my friends almost as long as I have been a teacher. They know me well. Know I am the total disorganization goddess of the world. Know my nonlinear, non sequential, non organizational personality. Know that I have difficulty pulling off anything linear and sequential, like a move.

And so they showed up to help. Laura, ever the hospitality goddess, with a cooler full of water and ice. Brenna, a true organizational goddess, with a plan for how we would get things into boxes and out of the school. And Karen, fresh off of field day with her own second graders, just there, as she has been a hundred, or maybe a million other times when I have needed her.

And within minutes, everything was organized. Brenna made boxes. Laura sorted piles and piles and piles of books by author and category. Karen taped boxes and took down the few remaining bulletin boards. Together the three of them figured out that I would need a storage locker. And sent me to procure said  locker while they made boxes, and packed, and taped some more.

By the time I got back from the storage locker, the books were all in boxes. The boxes were labelled and taped shut. The cars were lined up outside, ready to be loaded. And so, within three hours, 45 boxes of books were packed, loaded, and unpacked into a storage locker without incident (well, ok, there was the unfortunate incident in two unnamed book club members forgot how old they were and attempted to turn a storage cart into a surfboard, but only minor injuries were incurred), and we were sitting a local eating establishment, sharing adult beverages.

Today is our official last day. I have to clean out my desk and check out. But then I will spend the rest of the day helping my teammates pack.

Because not everyone has a book club like mine.

This made me tear up and evoked a range of emotions. Saddened by the closing of a school, overwhelmed for you by the task of having to box up all your precious books and joy as your friends arrived to help. We all need people to stand by us. Bravo book club.

This actually made me a little teary, Carol. What a blessing are our friends. I know you are more than grateful by your words. Literally, words cannot express that feeling that happens when others are there. I'm happy for you getting done, and also you had an adult beverage; you all certainly deserved it! Happy Summer! We aren't finished until June 8th!

I started crying when your book club came to the rescue...it was perfect, I sighed, because I knew everything was going to be fine. I need a pack like that...a person that is willing to come straight off of a field day. It is pretty cool that you are turning around and helping everyone else. xo nanc

Wow! What a story of friendship. And 45 boxes of books! I know we are kindred spirits & this is just another piece of proof. So glad you are headed into the summer, knowing you will have a job in the fall.
Ruth

The song, A Little Help From My Friends, echoes through my mind as I read this story of a book packing rescue. You are blessed with friends and books. What a life!

What a wonderful group of women you surround yourself with! I loved that they knew you so well they showed up to help. Now those are friends!

Enjoy your last day and all of your summer!

How lucky you all are to have each other and to trust in each other's open hearted friendship! What a move, though! Is your new building any where close?

Carol,
What a touching slice. The women in your life sound fan-tab-ulous.

Congrats on the completion of the school year. I would imagine that it is bittersweet (I am also moving schools so I can relate at some level).

What awesome friends!!! I wish I could borrow your book club when I have to pack my room in 13 days!

I could so identify with the line, I wanted to cry. And then the superwomen in your life came to your rescue. I love that they knew you so well and knew that you needed them! What a blessing to have such friends.

Those girls rock! But I think I'm still more amazed that you had 45 boxes of books! 45!?! I'm a little jealous, but how awesome is that library! Enjoy your summer and all the new chapters that are ready to be written soon . . .

I was so moved by your story and as Kim said, teared up. I so envy you that wonderful gift of friendship. I also am sorry that that is the end of your time there. You don't say where you are going next.
I can only imagine how many boxes I will need for my stuff when I retire next year, after 35 years.

I completely identify with you when you say:
"...I am the total disorganization goddess of the world. Know my nonlinear, non sequential, non organizational personality."

I loved the camaraderie,your generous community. I want to have been in your book group for as long as you have been!

It was a joy and honor to help you move, CW xox. Just wish it was not because Oakland closed...
Here's to your new adventures and the many blessings you bring to BW xox

Love your book club friends! This story reminded me of the time before my absolutely fabulous group of girlfriends and incredibly thankful for them now. Every. Single. Day.

Lucky you! I think every woman should have a group like that.

Good luck in your new digs