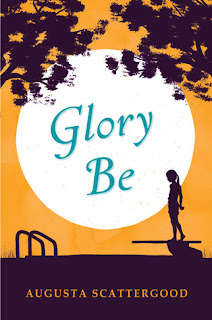 Glorianna (Glory) Hemphill is like most other eleven, almost twelve-year-olds that have just started their summer vacation. She's looking forward to spending hot summer days at the pool with her best friend, Franklin, and under the semi (ok, maybe not so much) watchful eye of her older sister, Jesslyn, who used to be her best friend, but has recently become interested in boys and the pep squad.

Glory's plans change, however, when the pool mysteriously closes because some cracks need to be repaired. Actually, there are no cracks, instead, the town council has closed the pool because a group of civil rights activists has arrived and wants to help blacks integrate public places, including the pool. To prevent this integration from occurring, the town council simply closes the Hanging Moss Pool.

Glory finds herself more than a little confused. Franklin has been her best friend forever, but his father, a member of the town council, and his older brother, J.T., a high school football star, are both strongly opposed to integration, and Frankie sides with them, and begins saying and doing things that put their friendship in question. Glory's family, on the other hand-- her minister father, Jesslyn, and Emma, the maid who has raised the girls since their mother's death-- are all in favor of integration, as is Miss Bloom, the town librarian, who is another good friend to Glory.

Miss Bloom introduces Glory to Laura Lampert, a girl who has come to spend the summer in town so that her mother can work as a nurse in a medical clinic for poor blacks. Laura doesn't seem to understand the "Whites Only" water fountain, or many other rules of Glory's very segregated southern town. Laura's actions, as well as those of Jesslyn's new boyfriend, another northern transplant, cause Glory to reconsider many of her own actions and beliefs.

A terrific look at life in the South during the Civil Rights era, as seen through the eyes of an adolescent girl. I'm thinking about using this as my last read aloud of the year…
Posted by Carol at 8:22 PM

Thanks for this, Carol. I'd love to hear what your students think of my book and I appreciate your sharing this excellent review on your blog.

I am ordering this right away...thanks, Carol!