Rooney, the service puppy, I have been training for two years, has just entered advanced training, which means that sometime during the next 12 months, he will become a full-fledged service dog. A while ago, I think when I attended CAPR's last graduation, I decided that I would make some kind of book to pass on to Rooney's new owner. Recently, I decided it would be a book of photographs and poems. This month, I'm going to try to write thirty poems about Rooney. They probably won't be very good or polished (today's definitely isn't) but I'm going to do my best. 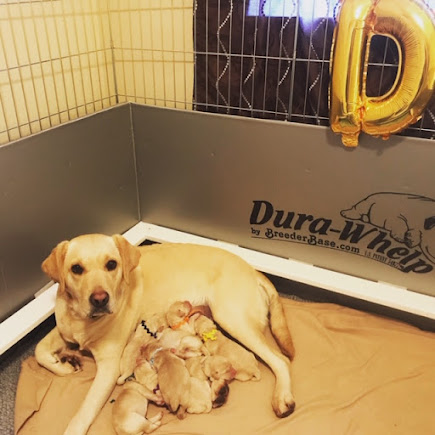 Mama Uma, nursing the D litter
"Beginnings"
Dylan,
Son of Oliver, Guide Dogs of America,
and Bergin's Uma
Born at Bergin University
March 27, 2019.
Fourth puppy,
fourth litter,
Guess that makes you
four squared.
ROYGBIV collars,
makes you green
one of eight,
Buried in a pile of yellow.
Serious guy
California dreamer
Do you know you will soon be
a Rocky Mountain Retriever? 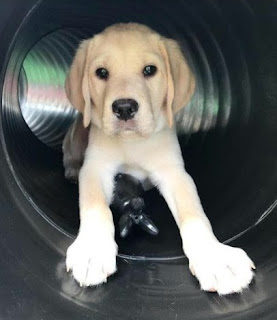 I believe it's a most wonderful idea for you to create a book with poems to pass on, Carol. But! Be sure to make one copy for you, too! I'm going to love seeing these pictures and also love that you included so much already in this poem. That ROYGBIV is fascinating and creative. And that 'lump' of babies - so cute! Enjoy Rooney's trip through time!

Love the paws, something for Rooney to grow into! And the pile of puppies picture with Mama is heartwarming. And I need help figuring out ROYGBIV. I may have to call Linda!

Oh, YAY! What a great idea for a gift to the new owners, and what a fabulous way for you to process all the joy of raising Rooney!

Those of us who have watched Rooney grow with you and witnessed your relationship treasure your poems and pictures. Rooney is such a sweet soul and so naturally loving and compassionate. He is learning all this from the greatest Light - You. Love and deepest admiration to you both, Carol. My heart is bigger and more hopeful because of you two.