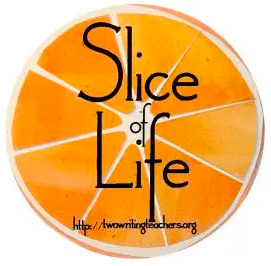 To tell you the truth, I didn't even think about it.

We were completely out of milk.

Galaxy had about one more day of dog food.

And so I went to King Soopers, where I shop pretty much every week.

And where there was a massacre last Monday.

I don't shop at the King Soopers in Boulder,

that's about thirty minutes away from me,

but I shop at the branch in my neighborhood.

Today, I walked in the door, and saw the front manager holding a sign about how to contribute to a fund for the victims. It had all ten names listed on it. And I thought about the 25-year-old front end manager that was gunned down last week. Some reports said it looked like she was trying to lock the doors when she was shot.

I saw a dad shopping with two preschoolers,

and a mom with a baby that looked pretty young.

And I thought about parents, shopping with their children in Boulder last week.

I wonder whether those little ones will ever be able to walk into a grocery store again.

She had an oxygen tank in.a bag over her shoulder.

I thought about all of the times I have taken my mom to the grocery store.

She uses a walker and doesn't move very fast.

And I wondered what we would have done

if something had happened.

In the back of the store,

just to the left of where I picked up my gallon of milk,

there was a door with a big orange sign,

and I wondered if it was there last week.

The guy who checked me out today was pretty grumpy,

he told me no, I couldn't leave my thirty pound bag of dog food

under the cart, I needed to put it on the belt,

the checkers usually tell you not to worry, they will take care of it,

I wondered what he was thinking about,

maybe he didn't want to bend over,

or be in a position where he couldn't see everything.

she had worked at the store for more than thirty years.

As I walked out, I noticed the security guard,

He was wearing mirrored glasses, and you couldn't see his eyes.

I wonder what he would have done

in the situation last week.

Today I went to the grocery store,

I wonder if it will ever be the same again.

Wow! I wish everyone could read what you wrote. It really brings this tragedy to the forefront.

Right there with you. I live in Centennial and also delayed my shopping more than normal. I had quite the scare after hearing a small (but seemingly loud given the situation) explosion in my local King Soopers when I finally did return and shared many of your thoughts in a post on last week https://carlambrown.wordpress.com/more-2021-slicing-writing/03-26-i-will-do-more/ Nevertheless, I'd contend that it won't be the same. Thank you for sharing these sentiments to help so many consider the angst that those affected may likely be feeling at this time. Your words are a gift.

So sad reading this.