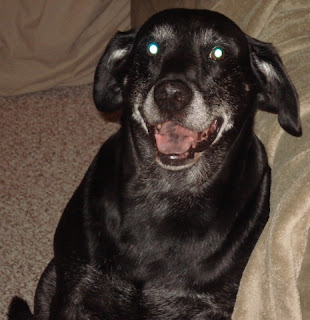 Couldn't get rid of enough words to get a haiku, so a tanka will have to do.

Or wait, maybe I can…


Back Story: I have had my dog, Star, since she was a puppy. When she was young, she was a typical lab, very friendly and good natured, but also high energy, and constantly into mischief. We went through three different obedience schools and Star still pulls on the leash, and makes 90 degree turns if there is the possibility of a snack. In her younger days, she was notorious for stealing food off the counter (even if the owner had just turned around to get something out of the refrigerator) and tipping over the trash.

Now she is 11, and she has aged noticeably in the past six months. Her muzzle was gray, now the gray and white frame her eys. She's much more mellow. She no longer follows me up and down the stairs, or even from room to room on the same floor. She still loves long walks, but is stiff the next day. And she's much more selective about begging for snacks, or snatching food off the counter. I wonder how long it will be before we have to say goodbye.