I love books about readers! Here are two from my stack of CYBILS Nonfiction Nominees. 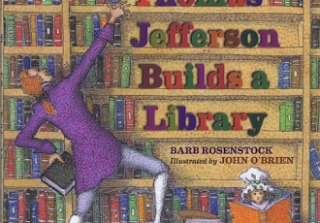 "Thomas Jefferson learned to read. And then, he never stopped.
He sat and he read.
He walked and he read. and then, lying in bed,
instead of sleeping, he read. "

So begins Barb Rosenstock's picture book biography, THOMAS JEFFERSON BUILDS A LIBRARY. Rosenstock traces Jefferson's love of books and reading from childhood (he supposedly read every book in his father's library before he was six), through his long political career. While he was president, Jefferson helped build the nation's Library of Congress,  then, after more than three thousand books were lost when British soldier burned them in 1814, he donated his extensive personal library to create the Library of Congress in Washington D.C.

Rosenstock's text (which would be a great mentor text for teaching about voice in nonfiction) is hugely complemented by John O'Brien's illustrations; I really can't understand why I'm not seeing this book on Caldedcott lists. Very, very clever- there are books everywhere! The title page, for example, is a Library of Congress, made of out of books. On another page, Jefferson is astride a horse, with a book saddle.  Interesting facts and quotes are contained in book-shaped sidenotes and inserts on each page. 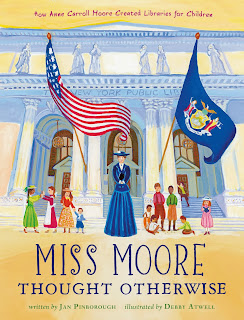 Another reading related biography, MISS MOORE THOUGHT OTHERWISE, details the life of Anne Carroll Moore, the woman who created the New York City Public Library's Children's Department. Anne Carroll Moore, grew up in LImerick Maine, where libraries included some books for older boys, not many for girls or young children. Moore moved to New York to attend the Pratt Institute's Library School, then became the librarian at the Pratt Free Library, where they had a children's room. Eventually, she was asked to take on the children's rooms for all libraries in New York City. Moore set an example for children's libraries across the country-William Howard Taft attended the dedication, and people like Theodore Geisel came to read at special events. Debby Atwell's gorgeous, brightly colored folk-artish kind of paintings add much to this story.
Posted by Carol at 9:08 AM

I've read the Miss Moore book-a lovely tribute, but still haven't 'seen' the Jefferson book, although I picked up a brochure about it at NCTE-looks great! Thanks Carol, & Happy Thanksgiving!