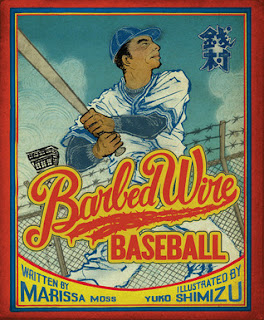 I know it's not baseball season, but  I have three baseball books at the top of my CYBILS stack today, so baseball it is. The first, BARBED WIRE BASEBALL, is about the Japanese Interment Camps during World War Two, so it kind of fits with Veteran's Day, right?

Kenichi "Zeni" Zenimura grew up in Hawaii. Although his parents wanted him to be a doctor or a lawyer, Zeni knew, from a very early age, that he wanted to play baseball. Zeni grew up, moved to California, and played baseball in the Fresno Nisei and Fresno Twilight Leagues. He even played in exhibition games against greats like Babe Ruth and Lou Gehrig.

In 1941, after the Japanese bombed Pearl Harbor, Zeni and his family were sent to an interment camp in Gila Bend, Arizona. Circumstances were bleak and it would have been easy to give up. Zeni refused to let his circumstances define him, however, instead choosing to build a baseball field and organizing 32 teams into three divisions, which played every day.

This book would be terrific in a unit on World War Two, Japanese Americans, or perseverance. It would also be a perfect companion for one of my favorite historical picture books, BASEBALL SAVED US.  End notes include biographical information about Zeni, as well as author and illustrator's notes. 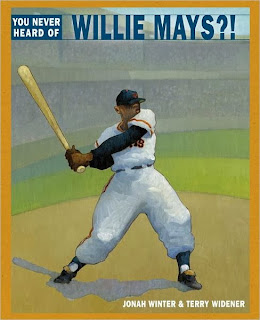 Another book that could easily be used in a Social Studies class is Jonah Winters' and Terry Widener's YOU NEVER HEARD OF WILLIE MAYS. Mays, as most people know, was one of the first African Americans to play with the New York Giants. Winters' biography captures Mays' childhood in Birmingham, his years in the Negro League, and then his ascent to the majors, where he was Rookie of the Year, and is famous for a play known as "The Catch" in 1954. Embedded ticket-shaped insets throughout the book feature important baseball-related information. The holographic cover will grab kids' attention, but it doesn't begin to compare with Widener's gorgeous illustrations throughout the book. Endnotes include a glossary, and information about where the authors got their statistics. 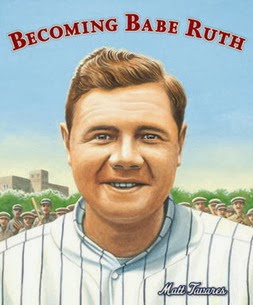 BECOMING BABE RUTH is a biography by one of my favorite picture book authors and illustrators, Matt Tavares. The story begins in 1902, when George Herman Ruth's father, disgusted with his naughty and delinquent seven-year-old son, sends him to Saint Mary's Industrial School for Boys, There, Babe Ruth meets Father Matthias, a baseball playing priest, who guides and mentors young Ruth, and shapes him into a world class baseball player. This biography captures important details about Ruth's baseball career, but also includes lots of information about his lifelong relationship with Father Matthias and the Saint Mary's industrial school. Author's notes include pitching and hitting statistics.

Love, love, love these books and authors/ illustrators! Thanks for sharing them. I am missing baseball season, warm air and lawn chairs. Glad I took this moment to relax and be refreshed.

Thanks for these ideas.