A COUPLE OF NEW PICTURE BOOKS 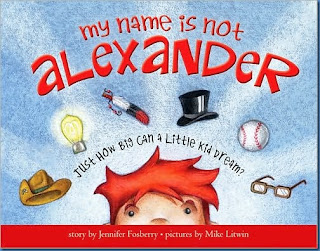 I am not getting to blogging right now. It's just not happening. Here are a couple of picture books I have read recently.
MY NAME IS NOT ALEXANDER and MY NAME IS NOT ISABELLA are books that I think will be fun to include in (A) a "me"unit at the beginning of the year or (B) a study of character and values or (C) a genre study of biographies for a primary aged child. I could also see pairing this with Barack Obama's OF THEE I SING in a study of how to structure a picture books.
In each of these two books, a young child wakes up in the morning, and tells his/her parent that they are no longer going to be called by their "real" name. On each page, the child assumes a different identity.
Over the course of a day, for instance, Isabella, wants to be called Sally (for astronaut Sally Ride), Annie, for sharpshooter Annie Oakley, Rosa (Parks) and Elizabeth (Blackwell, the first woman doctor. She also wants to be a mom, and ultimately decides that being herself is the best of all. 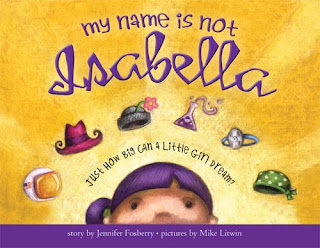 Alexander is the "boy" version of this series. Alexander also runs through a variety of personalities, including Teddy Roosevelt, Thomas Alva Edison, Chief Joseph, and Jackie Robinson.
A fun series for beginning readers.
Posted by Carol at 8:37 PM