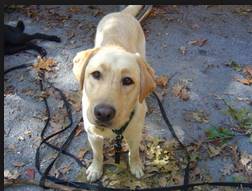 Most owners adopt dogs
but you adopted me
on that rainy November morning.
You planted your muddy yellow paws
on the front of my lavender raincoat,
enthusiastically licked my face
and declared me yours.

I knew you had followed someone to school
and so I dragged you back into the building
sure that the secretary would say,
"That's Cinderella, she visits every morning."
She would call your owner who would come and get you
and I would go on my way.

But that's not what happened.
Instead we stood, dripping on the marble floor
in the middle of the two story vestibule.
Your howl bounced off the high ceilings
until  finally the principal kicked us out
and I took you home.
No one ever claimed you
and so I became yours.

You lived with more gusto
than any dog I had ever known.
The first month you ate through three leashes.
You  knew how to open the refrigerator
and took the word "doggie bag" literally
You loved to swim and had a knack for pulling away at the park.
Ramsey and I would sit on the banks of the stinky duck pond,
watching you paddle joyfully back and forth,
and waiting for you to tire
so we could go home.
You were so naughty.

And yet, when the boys came,
with their broken hearts and broken spirits
you jumped right into the role of therapy dog.
As soon as you heard one of the boys
start to tantrum
(and there were so many that first year)
you came immediately
from the farthest corner of the house
and laid down next to them.
And they would scream and rail and cry
and throw things at me with one hand
while petting you with the other.
You laid there until they were quiet
and then a little longer,
just to make sure.

You, Maggie girl,
were a four-footed angel.
sent into my life
become someone knew
I would need you someday.

"No one ever claimed you
and so I became yours."
Love this story of how Maggie came into your life and the way she touched the whole family.

Have you read Sy Montgomery's HOW TO BE A GOOD CREATURE? She tells some good right-dog-at-the-right-time stories, but also great stories about tarantulas, octopuses, emus and more!

We had a therapy cat who did the same thing. Massive rages, objects flying, and there's Puck who takes one look, sees a lap, and climbs right up to settle down for a nap. It was so amazing. Maggie sounds like just the right dog.