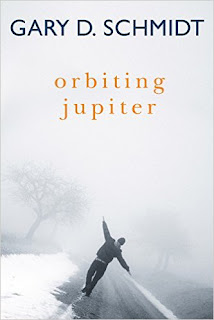 I am finally getting around to reading all of the books I have wanted to read for the last year. My goal for the summer, among others, is to add some new middle school titles to my repertoire. Since I pretty much flat out love anything Gary Schmidt writes, I decided to start with his newest book, ORBITING JUPITER. The story is told by Jackson, a sixth grader, who lives with his parents on a dairy farm in Maine. The family decides to take in a foster child, and Joseph, an eighth grader, who has had a rough, rough childhood, comes to live with him. Joseph has taken drugs, attacked a teacher, and gotten a girl pregnant. His one goal in life is to see his child, a baby girl named Jupiter.

There is a lot to love about this story. Maybe it's because of my boys, but the character of Joseph, a kid who has been abused by his father and then mistreated by the foster care system, really resonates for me. I love the kindness and grace offered by some of the adult characters- Jackson's mom and dad, and a few of the teachers.  I love the coming of age aspect--how Schmidt portrays Jackson, a good kid who keeps getting dragged into trouble caring for/defending his foster brother.

This scene captures the essence of the book for me. The family has just been to Christmas Eve services at the church. Joseph listens intently to the Christmas story, then afterwards, asks the pastor how much of the story is really true.


"I think it all has to be true or none of it," Reverend Ballou said.
"The angels?" said Joseph. "Really?"
"Why would you not believe it?" he said.
"Because bad things happen," said Joseph. "If there were angels, then bad things wouldn't happen."
"Maybe angels aren't always meant to stop bad things."
"So what good are they?"
"To be with us when bad things happened.
Joseph looked at him. "Then where the hell were they?" he said.
I thought Reverend Ballou was going to start bawling.
And that was the end of our Christmas service at New First Congregational (Orbiting Jupiter, p. 69).

This is a sad, sad book, but I think it's a book kids are going to love. I think it's a book a lot of kids need.  I can't wait to share it with our middle school kids in August. It will definitely be one of my first book talks.
Posted by Carol at 6:29 AM

Getting it...fast. I think I will love, love! xo

Sounds like an amazing read. Love The Wednesday Wars. I will have to try this one. Thanks for the review.