Hurray! You found it! The Poetry Friday Roundup is here!


You've probably already been to Catherine Johnson's blog and discovered that we switched weeks. About two weeks ago, I was asked to accompany a group of sixty middle schoolers to San Diego. We'll spend a day at the beach, probably the first time for many of our inner city, never been out of Denver travellers, then head to Ramona, California for six days at a Young Life camp.  It probably won't be the most restful "vacation," but it will be a lot of fun! Because I won't have access to wifi while I'm at camp, Catherine graciously agreed to trade with me.

In honor of my upcoming adventure, it seemed a perfect day to choose a poem from one of my favorite summer poetry books, "Have You Been to the Beach Lately?" by Ralph Fletcher. You probably already know Ralph's work, but just in case he's new to you, he often chooses a theme, e.g. the beach, and then builds a series of poems around that theme. Each of the poems can stand alone, but they are also connected to each other, and tell a kind of a story. Have You Been to the Beach Lately? captures a not-quite-teen's beach trip. 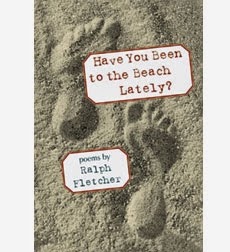