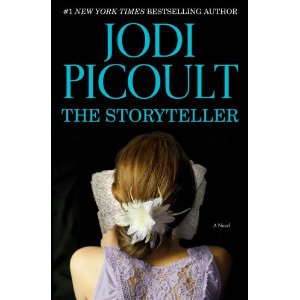 I have a confession to make.
I read a lot of kids' books.
And I read quite a few professional books.
But every once in a while, I take a break from all of that reading, and read an adult book. I read it with my book club. This summer's first adult read was THE STORYTELLER by Jodi Piccoult.

Sage Singer is a baker in a small New Hampshire town. Her parents have both passed away, her sisters are distant, and she is pretty much alone in the world, except for her grandmother Minka, a Holocaust survivor. Still mourning her mother's passing, Sage attends a grief group, where she becomes friends with Josef Weber, a beloved ninety-year-old teacher and little league baseball umpire. Mr. Weber soon reveals that he has kept a terrible, terrible secret for many years, and now he wants Sage to forgive him.

This is an amazing read, one of those that I will read again, probably more than once, just because I know I missed so, so, much the first time. I'll reread it as a human being because the story of the horrible things people can do to each other, and the strength of the human spirit and forgiveness is so powerful and so important. I'll read it because there are so many nuggets and life truths. About a third of the way through, I started listing them, but I missed a lot, and I don't want to forget them.

"When was the last time someone read aloud to you? Probably when you were a child, and if you thin back, you;ll remember how safe you felt, tucked under the covers, or curled in someone's arms, as a story was spun around you like a web." 428

"The first time you make a decision like that, a decision which rubs against all your morals, is the hardest. The second time, though, is not so hard. And that makes you feel a fraction better about the first time. And so on. But you can keep dividing and dividing and you'll never entirely get rid of the sourness in your stomach that you taste when you think back to the moment you could have said no."

"I know how powerful a story can be. It can change the course of history. It can save a life. But it can also be a sinkhole, a quicksand in which you become stuck, unable to write yourself free."

"Everyone has a story; everyone hides his past as a means of self-preservation. Some just do it better and more thoroughly than others." 369

"My grandmother lived a remarkable life. She watched her national fall to pieces; and even when she became collateral damage, she believed in the power of the human spirit. She gave when she had nothing, she fought when she could barely stand; she clung to tomorrow when she couldn't find footing on the rock ledge of yesterday. She was a chameleon, slipping into the personae of a privileged young girl, a frightened teen, a dreamy novelist, a proud prisoner, an army wife, a mother hen. she became whomever she needed to be to survive, but she never let anyone else define her." 416

What he did was wrong. He doesn't deserve your love. But he does deserve your forgiveness, because otherwise he will grow like a weed in your heart until it's choked and overrun. The only person who suffers, when you squirrel away all that hate, is you…I don't know what this person did to you, and I am not sure I want to. But forgiving isn't something you do for someone else. It's something you do for yourself. It's saying, 'You're not important enough to have a stranglehold on me.' It's saying, 'You don't get to trap me in the past. I am worthy of a future.'" 451

I'll reread THE STORYTELLER as a reader, because I want to think about my reading process, and how I  pulled together and made meaning all of the different narrators and time periods and genres (part of the story is told by Sage, part by Josef, part by Minka, and then there's also a medieval fairy tale written by Minka), and probably use it in mini-lessons this fall. And I will reread it as a writer, because I can't imagine how Jodi Piccoult could have put all of this together. She is an author I read when I need an escape and she is a great storyteller. This is much, much more intense than most of her books-- several people in my book club said the graphic Holocaust images kept them awake at night, and I could definitely see where it might do that.

If I had to recommend one book I had read this summer, probably even this year, it would be THE STORYTELLER.

Read an interview of Jodi Piccoult talking about the storyteller here.
Posted by Carol at 7:39 AM

I read The Storyteller this summer too! It was amazing! In fact, I have my mom reading it now. This will probably be my only non-professional adult read this summer.

Rachel,
I totally agree with you- amazing, on many different levels is a perfect word to describe this book. I usually don't buy adult books, but my book club was reading it and I was 111th on the waiting list at the library, so I ended up buying it. Was really, really glad I did, because I wrote all over it. Glad to hear that someone else felt the way I did.

I'm with you - lots of kids and PD books. But this one sounds too good! I must check it out! Thanks for sharing!

Thanks for the recommendation, Carol. I loved it. What keeps us from evil. Faith, for sure.