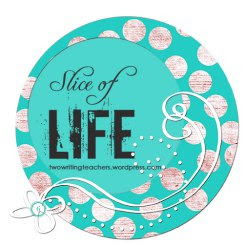 I was awake at three this morning.
Why, you ask?
Well, because today is the day that my first born is coming home.
He went back to school in early January and I haven't seen him since.
But tonight, at 9:16, his plane touches down
and he'll be here
for 12 whole days.
And I cannot wait to give my great big guy
a great big hug.

In the meantime, I've kept busy worrying all day.
And on and on and on, all day long.
I have called him, a few too many times, I think,
judging by his tone of voice.
But, you know what?
4:15 came. And he texted me that he was on the shuttle bus.
And then a little after 5, he made it through ticketing.
Before 5:30, he was at the gate (with his computer in case you are wondering).
And then a few minutes ago, he called and said they were starting to board.
In a couple of hours he will be here.
I think I'm going to take my book and leave for the airport.
Because it's been six months.

And I can't wait one minute longer.
Posted by Carol at 7:18 PM

I guess (for sure) you won't be reading this, but know that I'll spend the evening thinking about you, & then you with your son. Happy Times, Carol!

So sweet...all those worries and what ifs, and then they are here and walking into one's arms. Enjoy, enjoy, enjoy!!

And by now...he has arrived! Oh Carol I feel your joy because I know your heart for your boys. May all your worries disappear even if they happen! May the reconnecting be delightful, too!

It's so exciting when they come home, even for a short visit. You captured all the worries we have as parents, and I love your ending! Enjoy your visit with your great big guy.

Enjoy every moment of your precious 12 days back together with your son. It is such a mom thing to worry about whether they will make their way back to us successfully. The worst/best thing I discovered when our oldest studied abroad in Spain was realflyte.com (I think that's it) -- it tracks their flight and shows you a map of where they are. Still using it to this day.
Enjoy, enjoy, enjoy!

So glad he made it...everyone together, even for a short time will be so great. I love all your 'what if's'. That is definitely the way I usually think too. xo