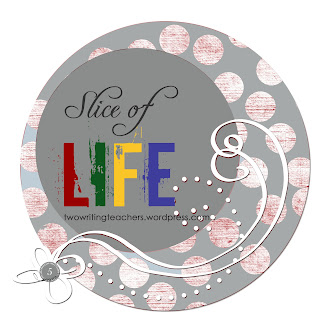 Son #2's voice pulls me from a sound sleep.

"Zay is on the phone. He needs to talk to you. It's an emergency."

I look at the clock. 1:30.  Emergency?  I imagine smashed cars, dismembered limbs, police blotters… My heart is pounding, but I try to sound calm. "Hi Zay, what's going on?"

My son, 900 miles away, is not so calm. "Why did it take you so long to answer the phone?  I left my computer at the airport."

I immediately picture Zay's Apple laptop sitting next to a chair on some concourse. Or, now, ten hours later, probably in some very far away city.

"I'm sorry," says Zay. "They made me take off my knee brace because of the metal. And I had to take off my jeans to do that. And they wanted me to hurry. And then I couldn't get my brace back on. And I just forgot to pick up my computer. "

I think of myself, going through the security lines at the airport. I'm not an every week traveler, don't have an airport security routine in my repetoire. Trying to juggle laptop, purse, carry on, etc. always leave me a little unnerved. I always think I am going to lose my driver's license or my ticket. Then Zay was trying to manage the whole knee brace ordeal too. I might have forgotten the computer too. I try to "choose kind."

"It's ok, Zay, they probably still have it in security. I will go to the airport in the morning."

I lay in bed trying to figure out this latest "mother emergency." Where I might find his lost computer at the airport. How I can pack the computer so that it will arrive in Arizona in one piece. How I will come up with the money to replace the computer if it's not there. My alarm goes off at 6, and before seven, I have braved the -2 degree temperature, scraped off the car, and am on my way to DIA.

First I ask a maroon-coated security guard. "Nothing is kept at in the security area," she says very authoritatively. "It's delivered to the Lost and Found office every twenty minutes.  You will need to go to that office, which is located in the far southwest corner of the main terminal,  about two blocks south of where we are currently standing. And the office doesn't open for 45 minutes, until 8."

I head that direction, hoping she is mistaken about the time. After wandering around for 15 minutes, in the administrative bowels of the airport, I finally find another maroon coat. "It is in this corner, but it's not on this floor," this one tells me. I go down the escalator and determine that the first guard was right about the time. The Lost and Found does open at 8. And of course I have not brought a book. I buy a cup of coffee, consider visiting a bookstore (you can never have too many books, right?), and sit down to wait the 30 minutes.

Finally, it is 8 o'clock. It takes the attendant about ten seconds to tell me that they do not have my son's year-old laptop. He suggests I go back to the security lines. Sometimes computers are left there. I walk the two blocks back down the airport, to the security area.

The woman at the entrance to security looks a little doubtful. "We don't usually keep that stuff," she says. "What you are going to need to do is get in this line." She points toward the first class boarding line, where approximately two-thirds of the people are decked in the Ravens' purple and black, evidently returning to Baltimore, after Saturday's game. "When you get to the front of the line, ask for a supervisor and see if they can help you."

"Yes, we have a computer," he says. "Can you tell me about the identifying features?"

"It's a Macbook Pro," I say confidently. "Silver, but it has a black breakproof case."

I think that will be enough information, but evidently, they have several silver Macbooks in black breakproof cases in the backroom.  "Can you tell me about the identifying stickers?" asks the supervisor.

I struggle to remember what stickers are on my son's computers. All I can picture is his brother's computer, which often resides in the middle of our kitchen table. Then he asks about the screen saver. I don't know what that looks like either. He asks what name is used for log in. I suggest several options, but none of those are right.

"You have to tell me something," declares my friend the supervisor. "We don't just give away laptops."

"Let me call my son," I say, digging through my purse for my cell phone.

It takes three calls to wake Zay. "Why are you calling so early?" grumbles he who woke me at 1:30 this morning. I tell him I am at the airport. I need him to describe his computer. Finally, after a little more grumbling he describes the black and white stickers on the trackpad, and the red and black city scene screen save. I pass the information on to the supervisor and within a few minutes, another agent appears with the computer.

It is almost 9 by the time I reach my car, computer emergency solved. I still need to go to figure out how to pack the computer, take it to UPS, and get it mailed back to Arizona, not to mention handle the regular Sunday stuff- grocery store, laundry, and the usual bulging teacher bag.

Just another day in the life of a mom…
Posted by Carol at 4:08 AM

Oh Carol, what an ordeal! I'm so glad the story had a happy ending, but at times I had my doubts it would. Someday (cross fingers) there won't be those early morning disaster calls. You are an incredible mom!

Oh, Carol! I'm so glad you have the computer but wow. Hope for a more relaxing week for you!

I remember a few phone calls in my past that gave me a big lump in my stomach, like this one, Carol. So little sleep for moms! And on your Sunday! I'm glad it had a good ending, & what a good problem solver (& walker) you are. Whew!

You achieved your Herculean task! I was not hopeful as I read the beginning of your post. What a positive story.

I am always losing my phone so I put look out on it (free) I can use another devise and track it and if need be lock it up or erase the contents.

Yikes...this run around would have made me really sweaty!!!! And at this point... "Can you tell me about the identifying stickers?" asks the supervisor. I think I might be hyperventilating. I hope this was on the weekend and you didn't have to get to school. XO PS I'm glad it was there!

I love your son's reaction - why are you calling so early? Any of my young adult sons would have said the same thing! What a story. I'm very impressed that you got the computer back!

What a whirlwind! I'm so glad you were able to retrieve the laptop. You ARE such a good mom. I hope this craziness slows a bit for you! You deserve a break!

Whew! So glad you got it back!