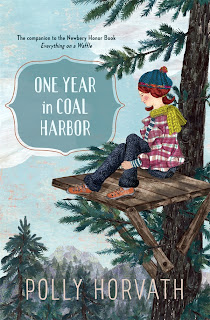 I have a confession to make. I read a lot, but I don't think my reading comprehension is very good. Why, you ask? Well, because I can't remember books. Take Polly Horvath's EVERYTHING ON A WAFFLE, for example. WAFFLE was a Newbery Honor book about ten years ago, and I'm pretty sure I read it. The reviews say WAFFLE is about an eleven-year-old girl named Primrose who lives in a small Canadian fishing village. Primrose's parents are believed drowned in a terrible storm at sea, but Primrose is absolutely sure they are still alive. While she waits for their return,  she lives with her Uncle Jack, but spends most of her time at the town restaurant, The Girl on a Red Swing, where absolutely everything, yes, even lasagna, is served on a waffle. School Library Journal said this about the book:


EVERYTHING ON A WAFFLE is ultimately a folksy, Garrison Keillor-style take on small-town life, spiced with sometimes hilarious, sometimes poignant anecdotes about the quirks and adventures of individual townspeople as seen through Primrose's wise eyes. It's a quiet, but very funny book.

Recently, A YEAR IN COAL HARBOR, the sequel to everything on a waffle, was published. It's gotten some positive reviews, and some people even think it will be in the running for the Newbery. I found it at the library over vacation. ONE YEAR IN COAL HARBOR picks up on Primrose's life year after EVERYTHING ON A WAFFLE ends. She's still living in Coal Harbor, but her parents have returned, just like she knew they would (I think they actually came back at the end of WAFFLE).

At the beginning of the book, Primrose is still spending lots of time with Miss Bowzer, helping out in the restaurant. She regularly visits Bert and Evie, an older couple who were her foster parents for a short while her parents were gone. Evie is also a cook, but her trademark ingredient is miniature marshmallows, sometimes even the colored ones. Primrose is determined that Miss Bowser and her Uncle Jack should get married, and she works hard at making that happen. And she is worried that she will never have a real best friend. Things change when Ked moves to town. Ked is Bert and Evie's foster son, and soon becomes Primrose's best friend. Primrose enlists his help in writing a cookbook, and protesting the logging of a nearby mountain.

If School Library Journal reviewed  ONE YEAR IN COAL HARBOR, I think they could say lots of the same things as they did about EVERYTHING ON A WAFFLE. Again, it has a folksy, Garrison Keillor-ish feel about life in a small town. There are lots of quirky characters. It's funny (although I wonder if kids will sometimes miss the humor). There's a kid friendly recipe at the end of each chapter. Miniature marshmallows figure prominently.

Not sure I think this will win the Newbery, but it's a great example of character development. And a fun read.
Posted by Carol at 1:13 PM