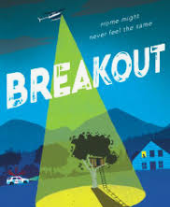 Summer is when I catch up on all the reading I meant to do during the school year. It's not that I don't read during the school year, I just don't get through novels nearly as fast, and by summer, I have a huge TBR stack. BREAKOUT has been in my stack for awhile, and when uber reader Tamara Jaimes gave it five stars, I moved it to the top of the pile. I totally agree with her evaluation, I loved this book! And I'm reviewing it on Poetry Friday because it's a novel with a main character that writes a whole lot of poetry.

Nora Tucker and Lizzie Bruno have lived in Wolf Creek, New York, their entire lives. Wolf Creek is a small town, only 3,261 people. Two thirds of the population are inmates at the prison. Many of the Wolf Creek's inhabitants work at the prison, Nora's dad is the warden there, and Lizzie's grandmother is the cook. Most of the townspeople are Anglo, with the exception being 53% of the prison population, who is African American.

At the beginning of the book, Elidee Jones and her mother, LaTanya, move to Wolf Creek, to be closer to Elidee's brother, who is an inmate at the prison. Shortly after the Jones family moves to the town, there is a prison break, and two inmates, both convicted murderers, escape and are on the run for about two weeks. The book uses a variety of mediums- journal entries, text messages, pie charts, signs, etc, to tell the story of those two weeks. I think my sixth graders, huge fans of graphic novels, will love this format.

And, as you have probably guessed, one of those mediums is poetry. Elidee's English teacher guides her to the work of William Carlos Williams; Elidee goes the library and seeks out poets like Nikki Giovanni, Nikki Grimes and Jacqueline Woodson. Elidee uses these poets' work as mentors for her own poems. Here are a couple I loved:

(Inspired by February 12, 1963 in BROWN GIRL DREAMING by Jacqueline Woodson)

I am born on a Tuesday at Bronx-Lebanon Hospital
New York,
USA--

While the rest of the country was still gushing over
Michael Phelps, and all his gold medals,
Mama was in labor,
watching the TV over her round belly and
cheering the Kenyans in the steeplechase
(They swept all three medals, oh yeah).
Then I showed up
And there was even more to celebrate,
six pounds, 15 ounces,

Daughter of LaTanya and Joe,
They're leaning into one another in a blurry photo
With me all wrinkle-faced and hungry in the middle,
Troy squeezed into the corner by the nightstand,
Daddy's arm around him.
One
Happy
Family.

Daddy's cancer is there, too--
Growing quietly in his belly
Couldn't see it in the picture
But it was already bigger than all of us.
Took him eleven months later
Right after I learned to walk.

I was too little to understand,
Too new to have a hole left in my heart.
I didn't remember the hospice bed in our apartment
Or the weeks of saying goodbye,
But Troy did.
Mama always said that messed him up.
When you've lived seven years with a
Big strong hand on your shoulder,
You sure must miss it when it's gone.


Another Story
by Elidee Jones
(inspired by "Through the Eyes of Artists" in ONE LAST WORD by Nikki Grimes. Her poem was already a golden shovel poem, based on a line from, "To a Dark Girl" by Gwendolyn Bennett. So I guess mine is a double golden shovel poem.)

Striking line: Your life's story is a tale worth telling."

Mama used to tell Troy and me, "Follow your
Dreams and you can be anything. Anything at all." But life's
Not fair sometimes. Sometimes your story
changes. Your plot twists and whirls and the wind
Blowing you in five different directions. That dream gets lost and its a
wonder you're even still here to tell the tale.
But you are. So you find a new dream worth
Following.  Another hope. Another story worth telling.

Tricia has the Poetry Friday Roundup at Miss Rumphius Effect.
Posted by Carol at 8:41 AM

I'm reading it right now for our Tween book club meeting next week. The poetry tucked in the pages and written by Elidee is a lovely surprise. You'll have to keep letting us know about the great reads you're finding this summer. We're currently in search of possibilities for our August meeting.

A boy checked this book out of the Public Library yesterday! Maybe I'll be next!

"it was already bigger than all of us" -- a very moving mix of celebration and foreshadowing loss. Thanks, Carol.

It's a wonderful book, I agree, Carol, would be fun to have an entire class read it, then tell their own stories through the different media, including poems. FYI- the link on Tricia's site is not working for your post.

I haven't had a chance to read this one yet, but I want to. Thanks for sharing your thoughts about it and the excerpts from it.

I missed that one, and with the waves of Huck books that keep coming and carrying my reading along, I might never get back to it. (And it's a little old for 5th, right?) I've heard such great things about it and love the parts you've shared here!

I loved Breakout and the poetry it included. Nice review. I was fortunate to attend a book signing event where Kate Messner talked about writing this book. I love how many layers of good there are in it.

I loved Breakout and so enjoyed reading these poems again. Thanks!