FRIDA KAHLO AND HER ANIMALITOS by Monica Brown

Several years ago, Monica Brown visited our school. The visit came as a surprise-- I got a phone call asking if we would be interested in having a bilingual children's author read aloud to our second graders. Of course we would! And that's how I became acquainted with Monica Brown, author of MARISOL MCDONALD DOESN'T MATCH/MARISOL McDONALD NO COMBINA. Monica is the author of many books, including WAITING FOR BIBLIOBURRO, TITO PUENTO: MAMBO KING, and PELE: EL REY DE FÚTBOL. I will always remember her, though, for how kind and inspiring she was with our second graders. My school's population is about 65% English Language Learners, and Brown talked about her own childhood, and about going to college, and becoming a university professor and then a children's author. At the end, she signed a book for each child. It was a magical time.

Brown's most recent picture book biography, FRIDA KAHLO AND HER ANIMALITOS was nominated for this year's CYBILS. In an author's note, Monica Brown says, "I've always been intrigued by Frida's relationships to her animal companions. Although she didn't get her most famous pets until she was an adult, I chose to write about Frida's animalitos as a way of highlighting Frida's magical creativity-- her strength, her sense of adventure, her indomitable spirit- throughout her life. What insights do her beloved animals tell us about the young Frida? It was an hour to use lo real maravilloso (the marvelous real) to imagine just that."

Kahlo owned many pets, including monkeys, dogs, turkeys, an eagle, a black cat, and a fawn, and Monica Brown uses those pets to tell Kahlo's story.


Frida had a parrot named Bonito. Like her parrot, Frida was colorful. She liked to wear bold shades that celebrated indigenous Mexico and her own heritage. She lived in a house the color of a bright blue feather- La Casa Azul- where she grew up with her mom, dad, and sisters.

Brown's use of animals makes a really complex artist much more accessible to young children. The book could also be a mentor text for students who are interested in biography.

And you can't really talk about a picture book without mentioning the illustrator. Maybe it's enough to say that earlier this week,  ANIMALITOS won a Pura Belpre Honor award for illustrations. 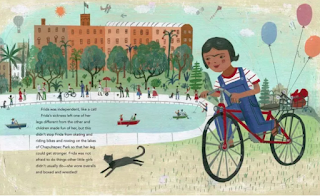 Requested this book yesterday while listening to the ALA YMA. This review makes me hope it arrives soon!