THE YOUNGEST MARCHER by Cynthia Levinson 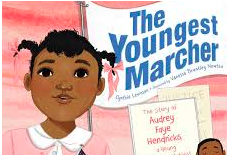 I'm struck, regularly, by the number of important things I really should know more about.

The Children's March is one of them. The March, was planned by Reverend James Bevel, Reverend Fred Shuttlesworth, and Dr. Martin Luther King, Jr., for 1963. The trio had originally asked adults to protest segregation laws in Birmingham, Alabama. Their goal was to make the jails so full that police would have to stop arresting people. Adults didn't want to participate in the protest for fear of losing their jobs, or being evicted from their homes, or beaten by police. Bevel, Shuttlesworth, and King finally decided that instead of using adults, they would have children march and fill the jails.

THE YOUNGEST MARCHER is the story of Audrey Faye Hendricks, who put on a "fresh pressed pinafore and shiny Mary Janes with turned-down socks" and joined the march for freedom. She was arrested and spent an entire week in juvenile hall, eating oily, soupy grits and slipping on a cot with one thin sheet for a cover.

After 5 days, the jails were full of children, and the march had achieved it's desired results. "Watching television in the dayroom, Audrey saw black people stroll straight into stores and restaurants like they belonged there. And two months later, the City of Birmingham "wiped segregation laws clean off the books."

An important story of advocacy for readers of all ages.
Posted by Carol at 8:49 AM