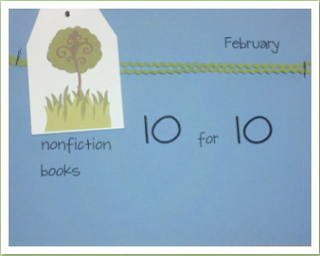 Don Graves used to always say that poets and scientists have a lot in common, because they both have to observe the world very closely. I thought about that comment this week, as I was putting together my list of  #Nonfiction 10 for 10. Most Fridays, I participate in Poetry Friday. Today, however, I also wanted to participate in the Nonfiction Picture Book 10 for 10. I decided to combine the two, and put together a list of books that combine nonfiction and poetry.

You can find lots more Nonfiction Picture book 10 for 10 here. (Hint: You should get out your library card and hide your debit card before you check out this site!) 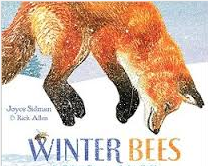 I know most people know Joy Sidman's work, but in my mind, she's the queen of nonfiction poetry, and I couldn't put together a list without including at least one of hers! WINTER BEES, about how animals survive the harshest of seasons, is her latest. I reviewed it here. 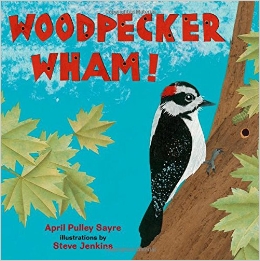 A poetic book about the life of a woodpecker, illustrated by one of my all time favorite Colorado artists, Steve Jenkins. A couple of sample pages:

Wedge it, skedge it,
Wham by wham
Clear those chips
Slam, slam, slam

End notes include six pages packed with facts about woodpeckers, for instance, I'll bet you didn't know. did you know that the woodpeckers's nostrils are covered by feather tufts that keep out wood flakes as they dig. 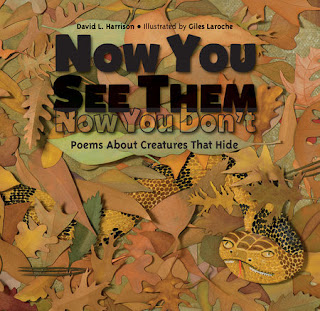 End pages include a paragraph about each animal. 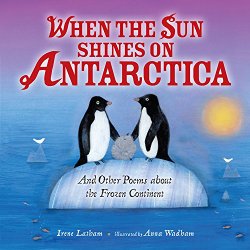 I love Irene Latham's DEAR WANDERING WILDEBEEST, which was a CYBILS finalist last year. Irene has a new book, with poems from Antarctica. 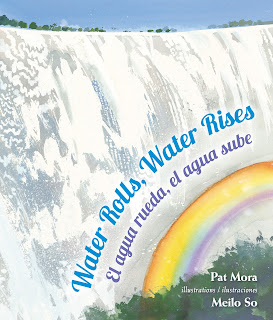 I work at a dual language school. I can't put together a poetry collection, then without including at least one bilingual book.  I love Pat Mora's book about water around the world.

Mora's poetry is accompanied by artwork by Meilo So (PALE MALE, WATER SINGS BLUE). End pages include not only a bilingual author's note, but also references to what part of the world served as the inspiration for the art. 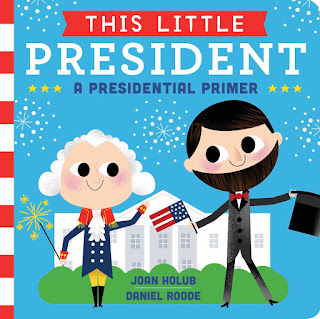 Now that I'm a grandmother, I've developed a new interest in board books. THIS LITTLE PRESIDENT presents a short riddle/poem about approximately ten different presidents, including George Washington, Abraham Lincoln, Theodore Roosevelt, and of course, Barack Obama . The facing page is a fact about that president.
This little president
Is a family man
When others say, “We can’t.”
He declares, “Yes, we can!”

The facts are basic, but really appropriate for the book-eating set, e.g. Barack Obama is the first African American president of the United States. 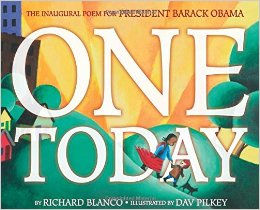 Barack Obama's inauguration speech, illustrated by none other than Dav Pilkey, yes, he of Captain Underpants fame! I'll be using this one with our middle schoolers this year!

…One light, waking up rooftops, under each one, a story
told by our silent gestures moving behind windows

My face, your face, millions of faces in morning’s mirrors,
Each one yawning to life, crescendoing int our day: 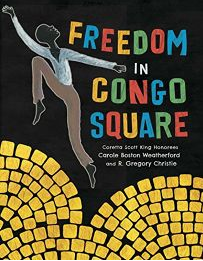 This gorgeous new picture book captures the lives of slaves in New Orleans, in the early 1800's. From early Monday morning until Sunday at noon, they worked hard…

Mondays, there were hogs to slop,
Mules to train, and logs to chop

Tuesdays, there were cows to feed,
Fields to plow, and rows to seed.

A moment without work was rare,
Five more days to Congo Square.


Finally, Sunday afternoon came, and they slaves, met at Congo Square and share song and dance and art and stories.

…They rejoiced as if they had no cares;
half day, half free in Congo Square

This piece of earth was a world apart.
Congo Square was freedom’s heart

End pages include an author’s note and a glossary. 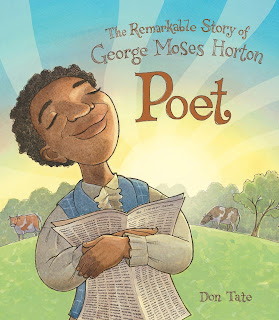 This picture book biography tells the story of George Moses Horton, a  North Carolina slave who taught himself to read and eventually became the South's first African American published poet. The author's note, where Don Tate talks about his experiences growing up as the only brown face in a sea of white, would make a great discussion in and of itself. 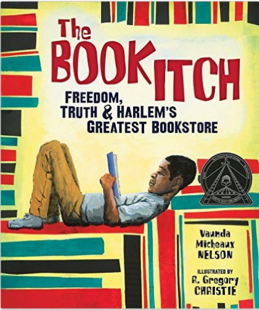 This is the story of the National Memorial African Bookstore in Harlem. Lewis Michaux didn't have much schooling, but he had a hunger for words and learning, and wanted to own a bookstore. When he took his idea to a bank for financing, bankers told him they would finance a restaurant, but not a bookstore, because black people didn't read. Michaux fought against this stereotype, and quickly became the heart of culture in Harlem, visited by people like Malcolm X and Muhammed Ali. Michaux frequently made up rhymes to sell his books:


Knowledge is power
You need it every hour
Read a book!

You are not necessarily a fool
Because you didn’t go to school.
Posted by Carol at 5:19 AM

Great collection! I'm thinking this might be my topic for next year, as there are so many great information books being told in poetry! I especially like Winter Bees and was thrilled to get it autographed last year at NCTE. My Top 10 features Picture Book Biographies of Diverse Artists (including several poets, of course)!

Wonderful way to combine the two posts, Carol. I do love Congo Square & The Book Itch, poetry and the illustrations, just awesome. I just got David Harrison's new book but haven't read it yet, and do also love Irene's Antarctica poems. And I have forgotten about Water Rolls, Water Rises, another lovely one. Great list. There are so many to love!

Wow! Lots of goo-ood stuff here! Thanks for sharing these non-fiction poetry books.

Carol, how perfect to combine Poetry Friday with NF 10 for 10. I'm requesting a few that are new to me. My favorite - the book of Richard Blanco's inaugural poem illustrated by Dav Pilkey!

Freedom in Congo Square is new to me, Carol - I think I need to order a copy right away. Your collection was lovely - perfect for Poetry Friday, of course!

I love to discover informational poetry, now you've just introduced me to lots of new titles. What a way to cover your bases today!