There's nothing I like better than a good dog story. I found two at the library today. Both of these would be just plain great read alouds for younger kids, but could also be used to teach point of view to intermediate or middle school readers.

I'M MY OWN DOG- DAVID EZRA STEIN
The narrator of this story is a dog. A very independent dog. He fetches his own slippers, curls up at his own feet, and wouldn't sit if someone told him, even if there was a bone involved. He throws his own sticks for fetching, and tells himself he is a good dog.

Except one day he needs a spot on his back scratched. And then the guy follows him home. So he as to get him a leash. And teach him commands. And clean up the ice cream he spills.

Perfect for any dog owner! 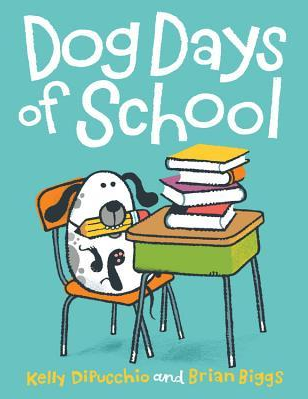 Charlie does not like going to school. On Sunday nights, his stomach does flip-flops and he can't fall asleep. "You're lucky you don't have to go to school," Charlie tells  tells his dog, Norman. The next morning, when Charlies wakes up, he and Norman the Dog have switched roles. Norman goes to school all week- he makes a clay sculpture, plays the maracas, goes on a  field trip, and even eats a triple hot fudge banana sundae with extra whipped cream. Charlie stays home-- drinking out of the toilet, learning how not to play fetch (with a skunk) and visiting the groomer.