SCIENTISTS IN THE FIELD series

There's a big, wide world out there. The kids I teach, however, live in a much smaller microcosm. Many have never been to the zoo, or the Denver Art Museum, or the Denver Museum of Nature and Science. They've never been to the mountains, even though you can drive there in less than 30 minutes. Their vacations consist of long, dangerous bus rides to visit family members in Mexico.

I love exposing kids to the wider world. One way I do that is through books. A series I have come to love is SCIENTISTS IN THE FIELD.


The Scientists in the Field series shows people immersed in the unpredictable and dynamic natural world, making science more accessible, relevant, and exciting to young readers. Far from the research laboratory, these books show firsthand adventures in the great outdoors—adventures with a purpose. From climbing into a snake den with thousands of slithering snakes to tracking wolves, swimming with hammerhead sharks, and collecting bugs, readers experience the thrill of discovering the unknown.

There are approximately 35 books in the series right now. You can see a full list here.
Nor surprisingly, two of the books have been nominated for the CYBILS nonfiction picture book awards.. 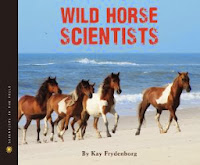 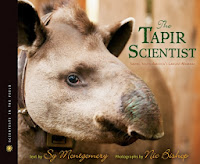 WILD HORSE SCIENTISTS follows scientists who work with the wild ponies on Assateague Island. As a little girl, I loved, loved, loved Marguerite Henry's MISTY OF CHINCOTEAGUE series, so this book, about the neighboring island, brought back lots of memories. The size of the herd on Assateague has grown too large, and author Kay Frydenborg follows the work of scientists attempting to use birth control drugs, shot by dart guns. It's hard work, requiring long hours in sometimes brutal weather conditions. Readers get to see the scientists' journals, and learn about their successes and failures. Fascinating stuff.

In THE TAPIR SCIENTISTS, author Sy Montgomery (KAKAPO RESCUE) and photographer Nic Bishop follow a team of scientists as they track the tapir in the Pantanal Wetlands of South America. Readers are again exposed to the tedious, exacting, and unpredictable work of scientists- this team would spend days looking for a tapir, finally find one, then use a dart gun to sedate it, so they could measure, photograph and fit the giant mammal with a radio collar.  Sometimes they would sight a tapir, but then lose track of it in the wetland. Other times the dart wouldn't work, and they would have to simply  let the animal go. Another altogether fascinating look at the world of science!

The website for the SCIENTISTS IN THE FIELD series has lots of interesting resources, including videos, interviews and links to related articles. Go when you have a little time to spend, because there's a lot to look at!
Posted by Carol at 4:07 AM