PENNY AND HER DOLL- KEVIN HENKES 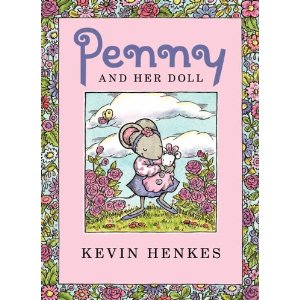 Last week, I was standing at the side of a first grade classroom, waiting to give something to the teacher. I felt a tug on my jacket and looked down. A tiny, six year old, with dark, tangled hair that reached halfway down her back, was pulling on me.

"You can?" I said, getting that goose bumpish feeling that I always get when first graders are learning to read (which is, for the record, on my top 25 list of things that are my most favorite things in the whole world). "Do you want to read to me?"

The book sitting on her desk was Kevin Henkes' CHRYSANTHEMUM. That's a perfect first grade book, but for the kids at my school, who are mostly English Language Learners and speak Spanish in their homes, it's usually a read aloud. I wondered if she really could read it herself. She flipped through the book quickly, looking for the page she wanted.

And there it was. One of those fun Kevin Henkes' illustrations that has a little extra dialogue melded into the picture. This particular illustration was Chrysanthemum, with words coming out of her mouth.  And it was those words that my new friend want to read. "I love my name," she said proudly, carefully touching each word. And then she looked up, grinning one of those toothless first grade grins. And I remember, for the millionth time, why I became a teacher.

Coincidentally, when I got home from work that day, I had a surprise- a brand new Kevin Henkes' book. PENNY AND HER DOLL is Kevin Henkes' newest book, the second in a series of Penny books. For those of you who are used to books like CHRYSANTHEMUM, WEMBERLY WORRIED, and LILY'S PURPLE PLASTIC PURSE, this one is a little different. PENNY is a book aimed at an audience who is just learning to read. Maybe even an audience like my little friend, who loves Kevin Henkes, but can't quite read most of his books, not yet anyway.

Penny lives with her mother and father, and two younger siblings. In the first book, Penny has a song she wants to sing, but no one wants to hear it. In this book, Penny's grandma has just sent her a new doll, and Penny is trying to think of the perfect name. There are not too many words on a page, and there's lots of repetition, so it will really support those little ones that are just getting the hang of this reading stuff. The illustrations are classic Henkes, Penny looks like she could Lily's sister or cousin.

This is a book I know primary grade readers are going to love.

I know one who already does!

REVIEW COPY PROVIDED BY PUBLISHER.
Posted by Carol at 8:42 PM

A great story, Carol, and since I love all those books, nice to hear about again. I love Penny and her Song, so imagine this is just sweet too.