IT'S MONDAY, WHAT ARE YOU READING? 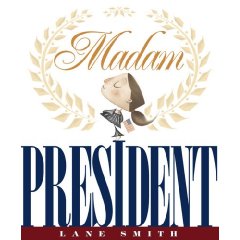 Kind of a disappointing reading week for me. Not sure if that was because I am in kind of in the doldrums-- my son left for college (and I keep trying to figure out how the house could feel so empty and quiet with the departure of one person, who didn't say ten words on a good day?) and then our four-year-old lab ate something and had to be put to sleep)-- or if the books I read just were not that great.

By far the best book I read this week was a picture book, MADAM PRESIDENT by Lane Smith. It's been out four years, probably since the last election, but I somehow missed it.  This book details the responsibilities of the president and her cabinet in typical Lane Smith fashion- slapstick humor, lots clever twists on words and illustrations. Perfect for an election year or a unit on American government. 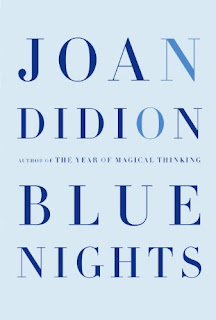 At the library last weekend, I picked up an adult memoir BLUE NIGHTS by Joan Didion. I read one of Didion's previous memoirs, THE YEAR OF MAGICAL THINKING, which described her grieving process after husband John Gregory Dunne and daughter Quintana passed away within 20 months of each other. BLUE NIGHTS is kind of a continuation of that memoir, except it focuses more on Quintana and captures the regrets that Didion feels as a parent--  Were there things she should/could have done differently? Did she recognize her daughter's struggles with mental illness and alcoholism? Were there things she, as an adoptive parent could, or should, have done differently? Didion's style is pretty dark, and I'm not sure it's a book I should have read this week, but it was definitely a compelling read.

I also read a couple of intermediate grade novels that I got at the library. Both of them seemed like they would be good, and started out strong, but then just kind of never went anywhere. I don't review books I didn't like, so I won't mention them here.
Posted by Carol at 7:56 AM

So sorry to hear about your dog; I know how difficult that can be.
Love Lane Smith but haven't read Madam President; will have to put it on my TBR pile. Better luck with your reading this week.

Magical Thinking was so intense - and I know (with one kid experiencing difficulties and another just out of the woods) I am not ready for this next Didion memoir. It would not be good for me. But Madam President sounds like fun...and about time, too!

I am thinking just what Tara said, that the election book looks like something I should be aware of, but I don't want to read the Didion book either-not for me, so thanks for the heads up on both Carol. Hope you're doing okay this week, thinking about you!

What a hard week! My son leaves for the Philippines on Friday, and my daughter for college in August, so I know how you feel. You need something fantastic and funny to read-- have you read Carter's I'd Tell You I Love You but then I'd Have to Kill You? Older, but always makes me smile. Feel un-Doldrum-y soon!

I love Lane Smith! I never read Madam President either but it looks like fun. He always seems to make me laugh. He reminds me a bit of Oliver Jeffers. A quirky kind of humor. :)

Sorry you has had a rough week. Hopefully you find a book to help you feel better!

Oh, what an emotional week! I'm so sorry.

If there's anybody who can be a doldrum-lifter it's Lane Smith. I haven't read Madam President either, but I will now.

Hope this week finds things a little brighter in your corner of the world!