A WEEK OF ADULT READING 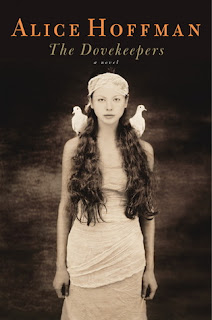 Way too much going on right now. We are in countdown mode until our state's "blessed event" (7 weeks, I think, but maybe eight, I sort of lost count) and I have a son who might graduate from high school and only knows that he wants to play football, and my school is closing and I have to find a new job, and so I did what I always do when life gets more intense than I can handle. I read.
This was a week of adult reads, which is actually pretty unusual for me. I always have at least one adult book going, but it usually takes me several weeks to get through them. This week I got through two, nibbled at a third, and also worked on THE ART OF SLOW READING by Tom Newkirk.
My book club has been reading Alice Hoffman's THE DOVEKEEPERS since November. It's historical fiction, set in Israel and the surrounding area, and tells the stories of four women who came together as dove keepers in a besieged town. It kind of reminds me of THE RED TENT, which I read several years ago. It's very good, and very sad, and very intense, and very literary, and I'm having a really hard time getting through it. I think I will go back and finish it, but probably not until things are a little less crazy in my own life, maybe this summer, I will be able to tackle it. 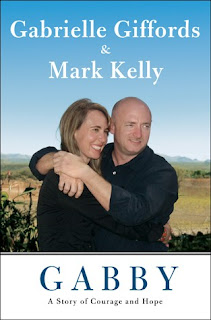 I found GABBY at the library, started it over break, and finished it this weekend. I am fascinated by the stories of people's lives and this book, a biography/memoir written mostly by Gabby's husband, astronaut Mark Kelly (with help from Jeff Zaslow, who is the author of several other biography/memoirs I have enjoyed) was interesting. I was fascinated by the decisions that they had to make when someone who is a very public person was injured, about how therapists used music to reactivate Giffords' language, and about Kelly's stories about his life as an astronaut. Only the last chapter is actually written by Giffords- at the point when the book was written she was not yet speaking in full sentences, and the last chapter is only a couple of pages, written mostly in phrases. I think it would be a really interesting piece to use to talk about voice. 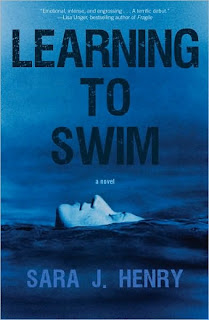 OK, and Saturday night between interactions with teenagers ("Mom, we are going over to say hi to S***." An hour later, they are back, "Mom, this is my friend- I am expecting S***, but instead he brings J***, who I have never met, but who stands and talks to me for 20 minutes, while Son #2 plays video games in his room. She stays an hour, then Son #2 takes her home, but 15 minutes after he is back the girls who managed the football team arrive to hang out and I retreat to my room with LEARNING TO SWIM by Sara J. Henry. This is a mystery, a total page turner. The main character (whose name I can't even remember right now), a young woman who is a freelance journalist in Lake Placid, is on a ferry crossing Lake Champlain, when she sees a small boy fall off another ferry. She dives into the water to rescue him and discovers that his arms are tied, strait jacket fashion, around his neck. She spends the rest of the book trying to find out who the boy is, where his parents are, and who was trying to drown him. I had not heard of this book before, but evidently it has won several mystery awards in the past few months. I can see why- I couldn't put it down…
Posted by Carol at 4:16 AM

The books all sound interesting, & FYI, I find Hoffman a bit challenging too. That last mystery does sound like a fast & good read. I'm sorry for the school closing & the upheaval you must be having in your life. Best wishes to you, Carol!

Thank goodness for the solace of books!