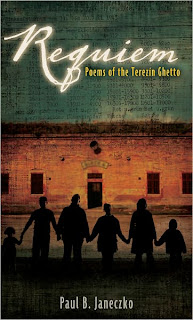 I'm a first round judge for the CYBILS poetry category. For the past six weeks, I've been reading and rereading about thirty poetry books that have been published in the last year. One of those books is REQUIEM: POEMS OF THE TEREZIN GHETTO by Paul Janezcko. In an afterword, Janezcko gives readers background about Terezin, a concentration camp, located on the banks of the Ohre River.

(Terezin) became home for the Jewish intellectuals and artists of Prague. As a result, it became a prison in which the arts were tolerated, then encouraged, as a Nazi propaganda tool. Classical music and opera were commonplace, despite the horrors and cruelty of captivity. Lectures were delivered in attics and basements of the barracks. Most of these activities were allowed by the Nazis, who saw these artistic events as proof that they were treating the Jews humanely and allowing their culture to flourish. The reality of the situation was, of course, quite the opposite. Musicians who performed beautifully one night were packed into cattle cars the next, transported to the gas chambers.

Each of the 35 poems in the book is told by different fictional character, either a prisoner or German guard. The poems, sparse and haunting, illustrated by actual pencil sketches and watercolors from inmates, help me to remember and care. They would be perfect for a middle or high school social studies unit on the Holocaust.

"Wilfred Becker/34507"
When Otto's number was called,
Eva wept.
She would go with him.
Insisted.
They would have one more night
together.
She traded half a loaf of bread
for two hours
in a kumbal with a curtain.
Otto asked if I would play
my violin.
"I would be honored, my friend."
"Can you play Johann Strauss?"
I smiled. "I am German, am I not?"
So it was on that frigid night
I played waltzes for them.
"The Blue Danube"
"Where the Lemons Bloom"
"Youthful Dreams"
All played softly
notes like stars.
When they pulled back the curtain
and nodded to me,
I bowed
and played a final waltz.
- Paul Janezcko
Poetry Friday is at Dori Reads

I have heard of this book, but haven't seen it yet. The poem is heart-wrenching, brought tears as I contemplated our petty whines in our daily lives and what we take for granted. Thank you for sharing & for both reminding us of what we can't forget, and of the blessings we have.

FYI-I tweeted your post. More need to read it!

The best and worst of humankind, together.

Why can't we learn to just be our best?

What a beautiful poem to commemorate such a terrible moment. I've heard raves about the book, but haven't seen it yet. I'll have to find it now. Thanks.