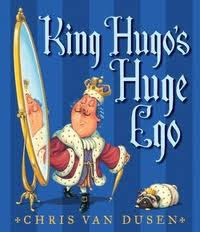 OK, so I'm trying to get back into blogging again, but alongside a full time job, and single mom, not to mention football board member (my second full time job every Fall!) it's a teeny bit much. This, then, will be another one of those mini-reviews.
KING HUGO is a king who thinks very highly of himself. One day, on a foray of his kingdom, his path is blocked by Tessa, a villager, carrying a heavy load. Not knowing she is actually a sorceress, he orders her to move aside. She responds by placing a spell on him, so that every time he thinks/speaks about himself his head grows a little. Before long, his head is so large that he can't get through doorways, or stand on his balcony to give his weekly "Speech of Adoration."
This book has a fairy/cautionary tale kind of feel. It's told in rhyme, which I usually don't love, but this one is terrific. I loved it, as did my fourth graders!
**********
Quote of the week (by one of my little ELL guys who had come in to help me set up a science experiment one day during lunch recess):
Student: When I get old, I am going to have a men's club.
Me (stopping mid-sand pouring, a little startled): You are?
Student: Yes. We are going to drink Coca Cola and then go to bed. And that's all.
As the very tired mother of two teenagers who came home after their football game, and then went out again to visit their adoring fans (girls), I think this sounds terrific. I hope my boys join soon!
Posted by Carol at 7:28 AM

So, so glad you're back ! This book sounds fun...I'm getting it...some of our kids develop this kind of ego really early.